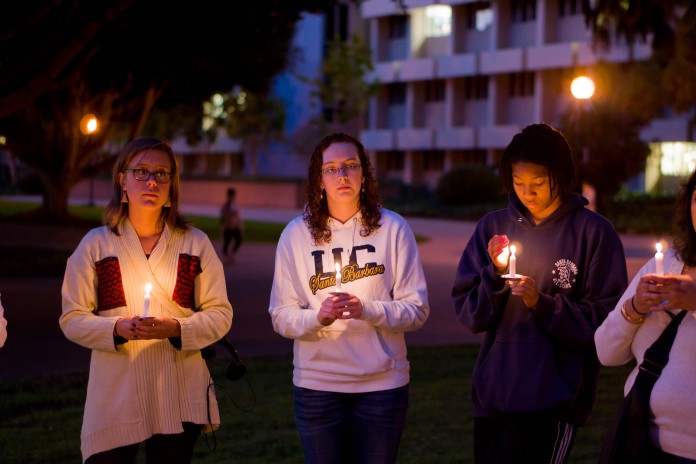 Students gathered together on Thursday, Jan. 31, at the University Center to honor survivors of sexual assault and to increase visibility of violent sexual crimes that have been committed in Isla Vista and around the world. The students at the University of California, Santa Barbara, specifically the South Asian Students Association, Men Against Rape, P.A.V.E, Take Back the Night, and the Women’s Commission, joined together on the bike loop with signs such as “My Body My Choice” and “Real Men Don’t Rape” to specifically honor the death of Jyoti Singh Pandey.

Pandey, a 23-year-old Indian woman, was brutally raped and left on the side of the road in India, and passed away a few days after. These students are now standing in solidarity not just for Pandey, but for all those who have suffered from sexual violence. What all the groups are attempting to do is join a world movement against sexual violence.

“It is so sad that it takes death for people to react,” said Rochelle Reed, a fourth-year sociology major and member of Men Against Rape. “We need to focus on people who haven’t said anything, and these people are not alone.”

The SASA has recently attracted more attention around campus. The other student groups were more than willing to collaborate with the SASA to commemorate women who have been raped and to raise awareness about the fact that the violent gang rapes are happening all over the world.

Members of the rally emphasized that being sexually harassed is in our culture, and that this rally represents all of the assaults that have been reported and that haven’t been reported. They tried to get other students involved by pointing out that even if you have never been assaulted, you know someone who has.

“There is an unsafe feeling in this rape culture that allows sexual assault to occur, and we want to support survivors and let them know that they are being heard,” said Liliana Salazar, a fourth-year psychology and sociology double major.

Men Against Rape started a campaign to combat rape, and claimed that there is a positive way to deal with the issue.

Moreover, the students raised concerns over issues that might feel more closely relate-able to the student population at UCSB—alcohol. While it is a big issue everywhere, these students feel like with the reputation of being such a big party school, alcohol consumption is almost expected, and sometimes abused. When people drink alcohol, their sense of judgment and decision-making is impaired, and what might seem like a legitimate consent is actually far from it. Thomsen and Reed truly wanted to remind students that there are resources here at UCSB, and people who are willing to help. Students are encouraged to come to the Women’s Center on Wednesday at 5 p.m. for the Men Against Rape meetings to talk about their concerns.

Their motto is, “What you say stays there, what you learn goes out.”

The center is open to all students who can go in anytime to talk to counselors who are trained to help with many kinds of issues. The Health and Wellness center also has counseling, and both of these centers focus on educating and advocating healthy behaviors across campus.

After the rally, the students of the SASA dressed in white, the color of mourning in India, and silently walked to the eternal flame to light candles in honor of Pandey. Sociology professor Kum-Kum Bhavnani also attended the ceremony and shared a few words about Pandey. Navkiran Kaur, second-year global and international studies major, as well as Co-President of SASA and On-Campus Senator, was frustrated with the lack of awareness in the South Asian community and the lack of visibility on campus. She stressed that domestic abuse and sexual violence are huge not only Asia, but also in IV, and we have to bring awareness and show it to the students.

“We are not remaining voiceless and we are taking a stand,” said Kaur.