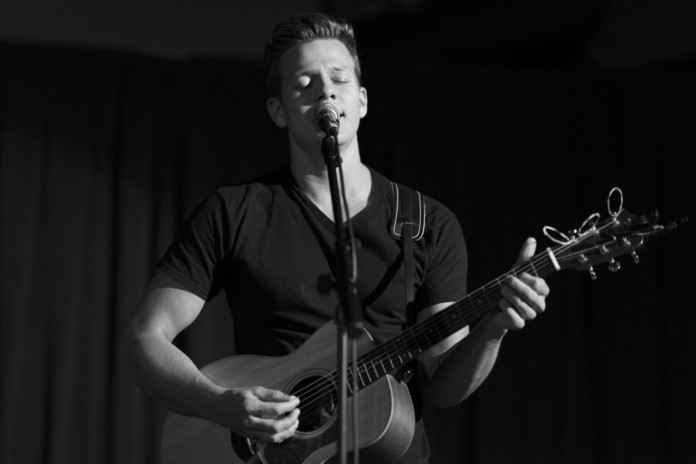 Five University of California, Santa Barbara singer-songwriters graced the Hub stage on Feb. 13 as a prelude to YouTube sensation Tyler Ward’s nostalgia-invoking performance, which paid homage to well-known songs and featured his own original music. The Singer Songwriter showcase was hosted by the AS Program Board.

The night in the Hub began with an alluring appetizer of UCSB’s own talented singer-songwriters. A quintet of singer-songwriters opened up for Ward, an independent singer-songwriter from Colorado who rose to fame in 2010 for his cover of Michael Jackson’s “We Are the World” during the winter Olympics. He has achieved online fame with over 1,078,000 subscribers and over 319,000,000 views on YouTube, and is currently one of the top 50 most popular musicians on the website.

The duo of Allyson Werner on guitar and the ultra-versatile drummer/beat boxer known as for the rest of the night as “Danny” opened the show, followed by the hilariously talented singer-songwriter Evan Blum, who held the audience captivated with songs dedicated to topics such as coach burners and guys dating taller girlfriends. The beautiful and talented Kate Beck graced the stage next with her melodic and atmospheric vocals, followed by the enchanting Erisy Watt, who opened with perhaps the coolest cover of Johnny Cash’s “I Walk The Line.” Lastly, Gene Alder lent his voice, which was  characterized by a growling quality.

Blum, a fourth-year communication major, said prior to the show, “I’m playing five original songs. I would describe my style as some songs are just straight rock and roll, and some are like more hip hop or rap. I do something that I call rhythm rapping which is when I’ll rap, and then I’ll put a melody with a rap. Kind of like if you’ve heard the song “Melody” by Jason Mraz. Kind of like that style, but I put my own spin on it.”

The aforementioned singer-songwriters comprised the perfect foundation for Ward, who wowed the crowd as the headlining performer. He exuded charisma and was interactive with the audience from the start. Ward showcased a great amount of talent in his voice and his personality. He repeatedly called people on stage, including “Danny,” and even sang to a lucky freshman named Emily Lathrop, whom he often jokingly referred to as Ashley.

Lathrop commented on her interaction with the star by saying, “I mean, it happens all the time…I’m just kidding. No, it was pretty cool. He called me Ashley, but whatever, I got over it. It was really fun; I didn’t know who he was before I came here and now I am in love with him. He was cool and everyone before him was really cool, too.”

Ward continued to impress concertgoers with originals such as “Raise Up” and “Falling”, but his bread and butter came from the covers of, Taylor Swift’s “Red,” Oasis’ “Wonderwall,” Snoop Lion’s “Drop It Like It’s Hot,” Gwen Stefani’s “Hollaback Girl,” The Fresh Prince of Bel Air Theme Song, 50 Cent’s “In the Club,” and Macklemore and Ryan Lewis’ current radio hit “Thrift Shop.”

“I know that without catching that YouTube wave when I did, I feel like I would be where I am now but without the technology like ten years from now, if that makes sense,” Ward said. “So I am so lucky and so fortunate to be able to use that platform to be able to connect with people worldwide. Before that I was, like, playing in college at bars and little clubs here and there for like eight or nine people. And when my family would show up there would be like, 25 people, and I would be like, ’25 people; it’s the biggest show of the year!’ The Internet changed everything.”

In regard to UCSB, Ward said, “All I know is that someone came in and told me that this is a historic place for drinking and that one time 20,000 people were on the beach and, like, contaminated the water or something.”

Ward also gave advice to aspiring musicians by saying, “Young artists should take every opportunity that they can. I remember when I started I was like going from nursing homes to bars to like shows at high school talent shows, just everything. And that’s kind of where I learned to cut my teeth and connect with an audience and then eventually, as you just grow and grow, you can start picking and choosing your events. But I would say for any artists just starting out, do as much as you can, as many times as you can. It’s that 10,000 hour rule. I think you start with good music. A good core foundation of talent, and then you push it online. If people like you, then they will find you, and it will spread.”