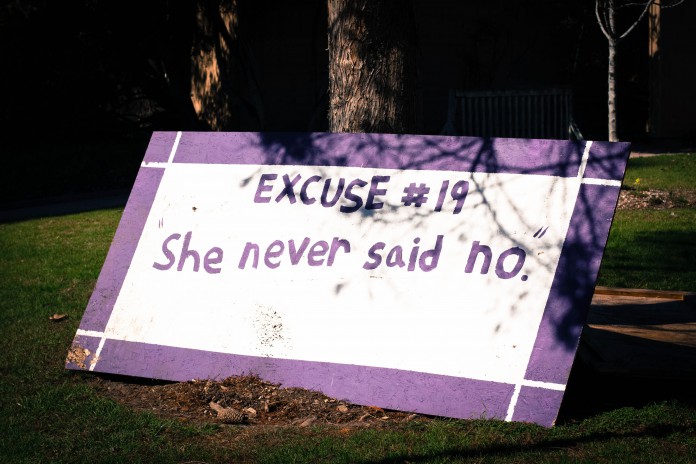 Cheyenne Johnson
Staff Writer
Photo by Morey Spellman
The Sexual Assault Awareness campaign recently put up four billboards along the bike path running through the University of California, Santa Barbara. The billboards state the four most common sentences the Sexual Assault Awareness campaign claim people use to justify rape.The campaign hoped the statements, “She never said ‘no,’” “She’ll eventually relax and enjoy it,”  “She was being a tease—she said no but meant yes,” and “We were both so drunk,” would bring attention to the issue of sexual assault on the UCSB campus and encourage students to act.“I hope students begin to think about these issues,” said Alexander Moore, third-year political science major and co-chair of Take Back the Night, the sexual violence awareness committee on campus. “Too often if you aren’t a survivor or a friend of a survivor you don’t have to address these issues. Sexual violence in our community should be something everyone is concerned about and I believe this campaign helps make that a reality.”External Vice President of Local Affairs, Rhandy Siordia, along with other staff members, helped place the billboards along the bike path. Siordia said the simplicity of the action does not negate its effectiveness.

“Though a rather simplistic approach to mitigating issues of sexual violence,” said Siordia, “bike path boards are the equivalent of billboards in our campus community and are, in my opinion, an extremely effective means of messaging. Our hope is that both potential offenders and survivors alike begin to recognize some of the common excuses made by offenders and that this knowledge may function as a warning or “red flag” in situations where sexual assault may occur.”

Moore said the decision to use billboards was in an attempt to reach the largest number of students.

“The decision wasn’t between using bike path signs or having events and lectures,” said Moore. “Rather, we decided that we needed to find a way to reach a wider audience in tandem with the constant efforts of numerous organizations on campus, including A.S. Take Back the Night and C.A.R.E.”

The campaign involves Take Back the Night, the Office of the External Vice President, County Supervisor Doreen Farr’s office, the Women’s Center, and the Santa Barbara Rape Crisis Center. The billboards, according to Siordia, are the first part of a three-part messaging campaign, and are to be followed by boards stating the consequences of sexual assault and sexual assault statistics. The current campaign is a lead up the Sexual Assault Awareness Month in April.

According to New York University Student Health Center, one in four college-aged women report experiencing rape or attempted rape, and one in five women are raped during their time at college. One in 12 college men said they committed acts that met the legal definition of rape and 35 percent of men reported some likelihood that they would commit rape if they were assured they would not be punished or caught.

Moore said these statistics should not be acceptable on college campuses.

“I think its important to bring these issues to the attention of our campus,” said Moore, “because quite honestly one incident of sexual violence in our community is too many. I think these issues aren’t really given the attention they really deserve and this is a step towards changing that.”