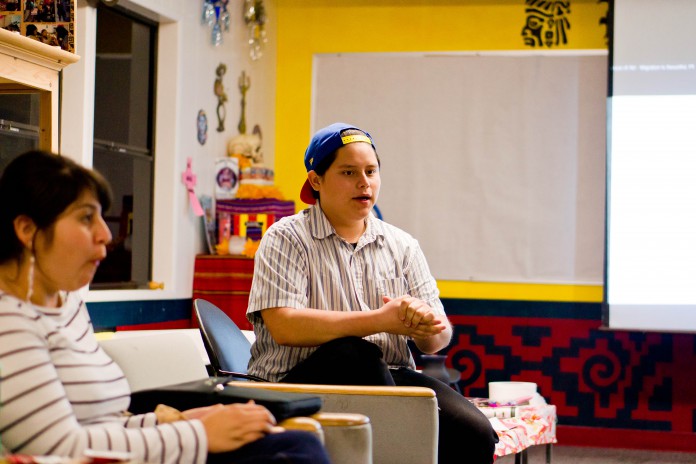 The reality of undocumented workers in the United States was exposed through several videos in El Centro at the University of California, Santa Barbara last Wednesday, Feb 13. Student group IDEAS was in charge of this event as part of Human Rights week at UCSB. The videos described several actions led by the activist Favianna Rodriguez, who is trying to raise awareness of the undocumented peoples’ situation in the U.S.

Rodriguez has created a symbol to defend undocumented people’s rights; she chose the monarch butterfly because of the way it registers patterns of migration among Mexico and U.S. searching for a safe environment. With this metaphor, Rodriguez wishes to denounce the escalation of hate crimes and the demonization of undocumented immigrants.

“We blame people who are trying to be like us. We have to see who are taking advantage of the [budget] cuts: the Corporate America. Greed to blame,” said Rodriguez in one of the scenes, referring to the discomfort with the current economic and institutional situation. Immigration reform is one of the most active public discussions in the media and in Congress. Last week, President Barack Obama referred to this topic in his State of the Union Address.

“If election-year politics keeps Congress from acting on a comprehensive plan, let’s at least agree to stop expelling responsible young people who want to staff our labs, start new businesses, and defend this country,” Obama said. “Send me a law that gives them the chance to earn their citizenship. I will sign it right away.”

Rodriguez and many undocumented people are expecting that to happen. In the meantime, they organize protests and try to mobilize people through social networks. They get together during the course of the Democratic National Convention in North Carolina. Many undocumented people aged between 20 and 40 drove the “undocubus” in a demonstration against the current immigration policy. “No Papers, No Fear—Ride for Justice” was the message they wanted to communicate.

They stressed that immigration reform must also be economic.

“The economic costs of our current, inflexible, immigration system are becoming clear,” said Edward Alden, expert of immigration policy at the Council on Foreign Relations. “Too many smart graduates from American universities are unable to remain in the country. Fruit and vegetable farmers have struggled to find the seasonal workforce they need. A more flexible immigration system that responds to labor market demands could give a huge boost to the U.S. economy.”

A large number of young people across the country is affected by remaining undocumented. The student group IDEAS at UCSB was born in 2006 in order to gather students affected and raise awareness within the student community at UCSB of this problem. Pedro Leon, third-year psychology student and member of IDEAS, says that being undocumented makes many things difficult, like paying for education.

“You cannot apply for financial aid for studying…but it’s not the only problem. It’s about feeling that you’re not even human.”