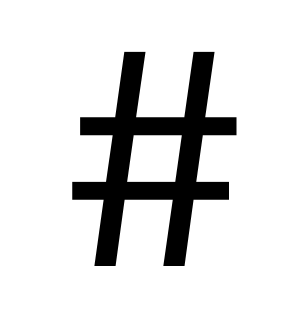 Ah, America, the melting pot of the world. The country where, in theory anyway, we’ve accepted and celebrated that which makes us different, welcoming Spanish, French, Dutch, Italian, Chinese, Russian—you name it. English words stem from hundreds of years of stealing from other countries.  Nearly 30 percent of our language has a French beginning with words like amulet, amusement, collage, and cereal all with origins from France. We stole the term brainwashing from China during the Korean War. Burrito, tortilla, taco, and nachos were stolen from Spanish when the term “bean and cheese sleeping bag” just didn’t catch on. Our language is a mess.

France, however, has decided it’s not particularly okay with this mixing and matching anymore. In an attempt to stop English words from seeping into the French language, the government has decided to do away with the word hashtag, the spoken version of the # symbol. It is used across social media sites, particularly Twitter, but the French have decided to replace it with the French word “mot-diese.” To say this has been met with some ironic and snappy criticism involving lots of hashtags is #abitofanunderstatement.

The French government has been taking issue with English words for over a decade now. In 1994, France introduced the Toubon law, which made the use of French obligatory in official government publications, in state-funded schools, in advertisement, and in French workplaces. Despite this, words like “email,” “blog,” “supermodel,” “take-away,” and “chewing gum” have become a common part of the spoken language there, and politicians said they worried for the future of the French language.

“Borrowing too many words from English opens the door to a mishmash of French and English,” said a spokesman for the Office Quebecois de la Langue Francaise, according to Metro U.K. “This can have an impact on French word formation, phonetics and grammar, not just terminology.”

Let me begin by saying that I love and appreciate different languages. French sounds beautiful all the time. Italians sound passionate (and slightly irritated) regardless of what they’re actually discussing. Spanish sounds flat out spicy. Languages are cultures in a spoken form, in a form that can be neither truly seen nor grasped tangibly. Language is a form of communication that is heard and felt. So to a point, I get why France is eager to preserve its language they way it is.

But I must agree with many a French Twitterers that they’re fighting an already lost battle. Globalization has taken a hold of the world. The food I eat sometimes travels across the entire planet to get to me and 99 percent of the stuff we all own is probably not made in the United States. The world has become united and part of that means that languages of the world are going to intermix. Words are going to jump and dive and slither through other languages. We’re all going to eventually be speaking some weird version of Spanglish, and there’s nothing wrong with this.

Broadening our understanding of other languages broadens our ability to understand each other. Other languages just speak differently. I know from two years of Chinese that there are at least, and probably more than, 3 ways to say the English verb “can” and that’s because Chinese view your ability “to can” just plain differently than in English. Confusing, but also all kinds of awesome.

To be fair, English is getting a bit high and mighty. The idea that everyone else should just speak English is lazy. It gives countries reason to decide we’re that annoying spoiled kid at the playground that keeps saying he owns all the toy trucks. Language should be forever evolving and growing, not just being taken over by another. We should all intermix and blend and maybe even sometimes tell another language that it’s acting self-righteous. Considering the extent to which we’re all interconnected, it only makes sense for us to unite in our ability to communicate.

So maybe touché, France, on supporting your heritage, but you’re still acting like a #bourgeois.

The NBA and Politics Don’t Mix

Letter to the Editor: A Word from the EVPSA Regarding Campus...