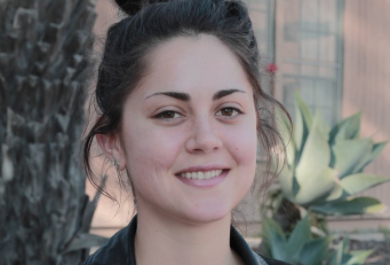 Q: How did you come up with the idea to put a tutu on Storke Tower? What motivated you?
A: I’m into fashion and last year I made a dress for myself made out of sheet metal. I don’t know how to sew, but I do know how to weld and deal with metal, so I made a dress for myself out of unconventional material. Then I wanted to switch that idea back on itself and make dresses out of relatively conventional material for non-human objects. I started small with the trees and trashcans around campus, anything that you can wrap a tutu around. Then I really wanted to do a building because I was really inspired by the artists Jeanne-Claude and Christo. They have done some really big projects on buildings and on land, so I was inspired by them. I looked for a building that was not super wide so I could fit a tutu around it. Storke Tower is already 120 feet around, so it was pretty big in itself. It is centrally placed and somewhere where people would see it. I thought about the history of Storke Tower and the plaza, which is an area that the school created in the 70s and 80s for the students to riot in a contained area where the police could watch over. Storke Tower is a masculine and phallic tower, so I wanted to feminize it a bit and poke fun at it for being a giant, phallic object in the middle of our school, but not in a derogatory way. I wanted to make people aware of it.

Q: How did you manage to put the tutu on Storke Tower?
A: The tutu is made out of tulle, which is what normal tutus are made of. It was surprisingly cheap. Legally, students aren’t allowed to use ladders, so we I had two guys use a genie lift, which is an accordion-shaped lift that can go up about 20 feet, and then I had two guys on the ground and me directing on the ground. I had my mom help sew the tutu because I learned how to sew for this project, but she’s a better seamstress than I am. I went home over winter break and we worked on it together. It was a nice bonding time. I have been working on this project with the tutus around campus since last quarter. Each tutu took four to six hours of my time, and the big one took at least 18 hours to construct and three hours to put up.

Q: What reaction were you hoping or expecting from the student body?
A: When I started setting up the small ones around campus, I wasn’t really sure, but I remember somebody sent me a link to the UCSB Memes page on Facebook and there was a meme about it, so I was really amazed. It’s a well-traveled page around the school, so I felt a little bit famous and I had no idea it would reach that many people, that it would go viral. So, I was really interested to see what people would think of the big one. There were a lot of Facebook posts and Instagrams about it, which were interesting. People have funny ideas about what it was, but I was happy that a lot of people seemed to get it: that it was a tutu on a giant, phallic building. I haven’t really done much public work before, so it was interesting. It gets art out of the gallery space and into space where non-high-brow art people can see it. There has been a lot of positive feedback, which is nice.

Q: Why is it important to have art on campus?
A: As an artist, I obviously think it’s really important. People like to see art, but they don’t seem to know about it. I’m in a world of art and every quarter ends with gallery shows, but everyone else’s quarter ends with a final. So, my art environment is really different than most people experience on campus. But I think people want to see art, but they don’t always know where to go or have the time to, so I think getting it out on the campus lets people enjoy it.

Q: What can we expect next?
A: The tutu will be taken down soon because it’s starting to get destroyed. I’d like to do more work with the tutus in my future, but that could be years from now. I would like to get funding, and if I do, I’d like to do really big things. I’d like to get a huge and fluffy tutu. This is just the beginning of what I could afford. I’d like to go bigger and do different kind[s] of garments on buildings or objects, like the trees. Trees are funny, person-like things. Also, as an honors student, I’m preparing for my honor thesis show. It will take place in building 479, also known as the Red Barn, during the first two or three weeks of next quarter. I’m hoping to invert the tutu on the inside of the building for that show.