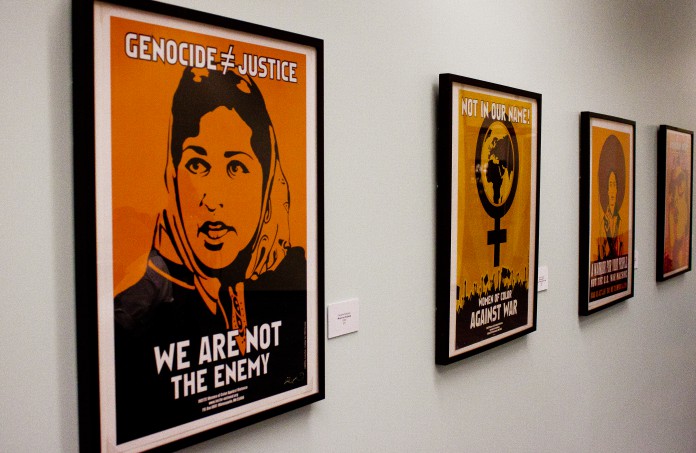 If you walk straight into the Davidson Library and turn right to the stacks, you’ll see a giant sign on the wall that says “Favianna Rodriguez: Art of the Activist Imagination.” I have a tendency to see the signs for whatever is showcased there, and then walk on past it. A lot of people do that. But what if you stopped and looked at it?

Well, you would find a series of 10 poster prints framed on the wall, each featuring vibrant colors, vivid portrayals of people, and unapologetic slogans that read “Stop the War on Women” or “The Only Secure Community is an Organized One.” These posters are brash, and they don’t mince words at all. The images are beautifully abstract, and feature bold lines and cheerful colors. The brightness of the poster is juxtaposed with the audacious slogans and altogether the effect is bloody fantastic, but also extremely controversial.

Rodriguez doesn’t attempt to tone down her political beliefs in any way. To her, art is a catalyst for social change. An artist, activist, and teacher from Oakland, California, she uses art as a way to communicate her thoughts on all sorts of social issues like immigration, economic injustice, environmentalism, sexism, racism, and war. A bright yellow and red-orange poster exclaims, “Undocumented, unafraid!” A gray and blue poster screams, “Climate Crisis Is Real: Climate Silence is Criminal.” And one of the most controversial slogans there boldly claims, “Green is not White: Green is for All. Clean Air, Non-toxic Workplaces, and Green-Collar Jobs for Immigrant Workers.” That one is a double-whammy: pro-environment and pro-immigrant rights at the same time!

How effective is Rodriguez? In a sense, I feel that she battles discrimination with discrimination. It is almost like she reinforces stereotypes with her posters, but they’re also so bold that their shock value makes them extraordinary. She foregoes political correctness in the phrases that she uses (“Green is not White,” really?), and the brashness of the slogans that build up her argument are also ultimately her biggest flaw.

There’s a language to use when you want to be taken seriously, and a language to use in the bar with your friends. It would be an impressive feat to take the bar talk to the courtroom and be successful, but in most cases, all it really does it prevent people from sympathizing with you. To me, Rodriguez achieves that lack of seriousness, in the sense that I sympathize with her views, but citing her as an influence would be something to shy away from. Women’s rights? Rodriguez tackles it, but with this slogan: “Pussy Power! The Slut Nation is Here & We are Pissed Off!!! Run and Hide, you Misogynist, Crusty Fuck Heads! The War on Women is a War on Everyone.” Now, I’m all for rights to my own body and “Pussy Power,” but in no world would I seriously describe it like in those terms. I’m not the most conservative of people, but her posters made me feel like I wanted to put some metaphorical clothes on them.

The bottom line: I like Rodriguez. She seems spunky, and there’s no denying her talent. When I look at her art, I have an emotional reaction, not only to the actual art of it but also to the messages that she is putting forth. The point of art is absolutely to stir an emotional reaction in the viewer, because art is visceral, and in that Rodriguez succeeds. When it comes down to the politics, sometimes I agree, sometimes I disagree, but always I see the validity of her views. However, as political propaganda, the intended use of these pieces, her art falls short.