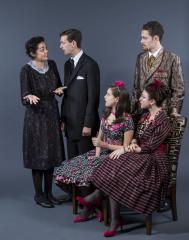 “Absolutely (perhaps),” a 1917 play that revolves around the search for the truth and the effects that secrets and gossip can have on a community, made its debut on Feb. 15 at the University of California, Santa Barbara. The play was put on by UCSB’s Department of Theater and Dance and was directed by Simon Williams.

This Real Housewives of Wherever-esque story takes place during the aftermath of World War I in a town full of incredibly nosy people. Amalia Agazzi and her daughter Dina live next door to an older lady, Signora Frola, who seems to be in a strange relationship with her son-in-law, and whose daughter seems to be kept captive by her husband in their flat across town. Confusion ensues when Dina and Amalia attempt to uncover the underlying secrets of the situation, an act that causes other members of the community to get involved and create a conglomeration of conflicting opinions. As the gossip takes off and more people contribute their theories on what is going on, the idea of what is real and what is fabricated becomes obscured. The show continues on with incredible twists and turns that leave the characters, as well as the audience, in complete suspense and confusion.

I was impressed by the caliber of “Absolutely (perhaps),” and thought it was a fantastic show. The plot was full of suspense and humor that kept the audience engaged and entertained from start to finish. The actors did a stellar job of staying in character and relaying their frustrations with each other through their movements and nonverbal communication.

Patrick Arter, a third-year theater major with an emphasis in acting, was the best actor on stage in my opinion. He expertly portrayed his character as being deceiving and entertained by the whole situation as it developed, and added an extra humorous spark to the performance by speaking sarcastically to the other characters with naturalness and ease.

Chase O’Donnell’s role as Signora Cini was also notable, as she provided a fair amount of comic relief for the show. For her role she portrayed Signora Cini as an awkward friend of the Agazzi family, a role reminiscent of that one friend we all have who can be annoying, but is loveable nonetheless.

Arter and O’Donnell, along with the other members of the cast, proved to be a well-cast group to bring the early 20th century play the spice it needed to appeal to modern audiences.