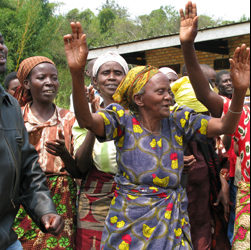 “Cultures of Resistance,” a documentary film produced and directed by Iara Lee that was presented on Feb. 13 at University of California, Santa Barbara’s Multicultural Center as part of the “Cup of Culture” series, questions if individual gestures truly make a difference against tyranny and oppression. Can peaceful protests truly change aggressive regimes? Who’s to blame when children grow up in poverty, without clean drinking water, only to turn militarily against those who cause their sub-par living situations? In an attempt to discover the answer, the film travels over five continents and documents dozens of personal stories, proving with each addition that the wars of resistance are neither clean cut nor simple.
“Worldwide, people from all walks of life are finding creative ways to oppose war and promote peace, justice, and sustainability,” states the “Culture of Resistance” website. “Culture—including film, music, and food—is fertile terrain for this struggle. Education that nourishes a critical mind and fortifies the soul is just as essential.”

The documentary scans across Africa, the Middle East, Asia, and South Africa to examine the people involved in conflicts there. It depicts Burmese monks marching in peaceful protest against a dictatorship. Teachers offer cameras to children in Palestinian refugee camps in Lebanon, hoping for the chance to document their worlds will empower them to aim for more than the slum life they’ve always known. In Brazil, a country descending into chaos in which murder is now commonplace, musicians strive to change those negative perceptions. Taking the very guns their friends were killed with, they transform the weapons into guitars; in doing this, they raise the question: if this object designed for killing can change, why can’t people?

Each story is unique, and shows each person suffering and surviving through an unfiltered lens. But through music, art, movies, and other forms of cultural expression, revolutionaries aim to change the paths of their country. The native tribes fighting against a dam in the Amazon seem to share a bond with the women waging for peace in Liberia. Capoeira masters from Brazil urge children to dance rather than engage in their country’s warfare, Nigerian Delta militants fight against oil companies, and hip hop artists from Palestine try to bring attention to their country’s plight—all the groups express a resonating need for peace.

For many of the resistance groups, the need to stand against injustice stems from the prejudice and greed of other groups, and Iara Lee does her part to show sides and stories usually unrepresented or mostly ignored in American and Europe.

For example, the country of Rwanda gained fame in modern times on account of the 1994 genocide in which 1 million people, mostly of the native Tutsi ethnicity, were killed over 100 days in a mass killing. However, once the genocide was exposed and the worldwide horror passed, many people returned to ignoring the country and its troubles, including hundreds of thousands of children that were left orphaned. Rebuilding the only ways they could, the country initiated a “one child, one home” policy in which families took in the orphaned children. Following this, the percentage of women in government began to rise; now, they have the highest percentage of women in any parliament. The country, as shown by Lee, appears to be repairing.

The film covers not only the aftermath of conflict, but also focuses one of its short segments on the conflict in Israel, which is generally viewed from a one-sided perspective in the United States. Lee shows the Palestinian children involved in the conflict, many of who have lost their homes to the military issue between Arabs and Jews. These children are given cameras to photograph their lives; this offers them the unique chance to present their world and perspectives to the rest of humanity.

The film’s broadness is simultaneously its greatest strength and weakness. By covering 11 different countries working through 11 different types of resistance, Lee reveals how interconnected and similar the resistances are. No matter where you go on the planet, be it the Congo, Iran, or Burma, people are trying to encourage peace through peaceful means. However, this also detracts from the film. Because it does not focus on one conflict, the viewer gets a shallower understanding of each issue. Though it suffers from an arguably discontinued and jumbled view, the film still manages to expose its audience to the varying cultures and societies still vying for peace.