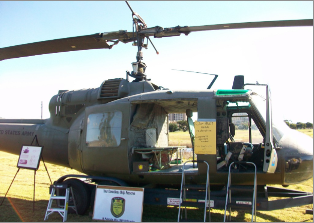 It’s not every day that you see an Army helicopter at Ocean Meadows Golf Course.

On Saturday, Jan.12, the University of California Santa Barbara Student Veterans Organization (SVO) partnered with Future Leaders of America to host a golf tournament at Ocean Meadows to raise money for their respective organizations and the Project Wounded Warriors, which aids homecoming troops and their families.

Current president of SVO Victor Marta said that the idea of the tournament was conceived when he and the former president of SVO, Raymond Morua, were golfing at Ocean Meadows and noticed that one of the employees was wearing an Army jacket. Simon Herrera, the Ocean Meadows general manager, offered to give the student veterans free golf lessons every Saturday.

“We were talking to Simon a lot about having a fundraiser involving the community and veterans groups, and one of the ideas was to have a golf tournament,” said Marta, a second year economics/math and political science major. “He said that if we hosted it at Ocean Meadows, he would help us out by getting players and promotions.”

Paul Malone, third-year biology major at UCSB and member of SVO after service in the Army and National Guard, said that the tournament was a success and about 40 people attended.

The UCSB SVO was joined by various veterans organizations, including the Santa Barbara chapter of Veterans of Foreign Wars (VFW) and Vietnam Veterans of America.

John W. Kerr II and Gerry B. Roberson from the Vietnam Veterans of America arranged the transportation of the UC-1C “Huey” helicopter to the golf course. Attendees and passersby were invited to enter the helicopter and learn about its combative history.

Retired Sergeant Major Jonathan Church and acting Commander of Post #1645 of the Veterans of Foreign Wars attended the event and arranged for VFW to donate trophies for the winners of the tournament.

“Anything they [UCSB SVO] need, we’ll try to help them out,” said Church.

Despite the tournament’s success, UCSB SVO may not be able to host future tournaments at Ocean Meadows Golf Course because of plans to revert the land to wetlands.

In 1965, developers filled part of the Devereux Slough with dirt to create the Ocean Meadows Golf Course. Now, The Trust for Public land is working to restore the land back to its original state. If they are able to purchase this land, they hope to link over 600 acres of land to create a wildlife corridor. As a public space, the reserve will be open for mild recreational use and environmental education and research.

The Bioregional Planning Associates website, bioregionalism.org, asserts that there are 290 species associated with the Devereux Slough. Michael McGinnis, the director of the UCSB Ocean and Costal Policy Center at the Marine Science Institute, consults for BPA.

“Continued residential development in the watershed may increase contamination of runoff and sediment entering the slough,” writes BPA on bioregionalism.org. “Exotic plant species are displacing native plants and altering the habitats.”

Victor Marta, SVO president and Navy veteran, said that if the golf course closes, he will miss the price for the quality of Ocean Meadows and its close proximity to campus.

“This has really given me a chance to improve at a golf course that is very well taken care of,” said Marta. “It’s a great course; you’ll see birds and geese and swans as you’re playing. Also, I’ll miss the friendly staff. They’re really welcoming and they want you to have a good time.”

UCSB SVO hopes to host events in the future to foster more connections between the various veterans organization in the Santa Barbara area. Visit the websites of Vietnam Veterans of America and Veterans of Foreign Wars to learn how to get involved or donate money to scholarships for student veterans.