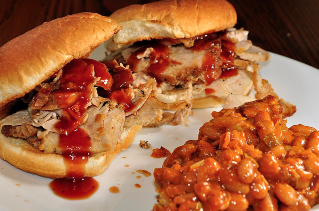 Michael Gould admits to barbecuing everything he can. If it’s ever an option, he uses the barbecue. Gould, who has been in the restaurant business all his life, moved to Santa Barbara 32 years ago. After gaining a rapid interest in barbecuing because of the outdoor-oriented lifestyle of the Santa Barbara area, he’s opened up his first restaurant, Kaptain’s Firehouse BBQ in conjunction with Study Hall on Pardall Road.

With sauces and rubs that he makes himself, beef from the Santa Ynez valley, and rolls he picks up fresh every day from a local bakery, Gould is doing barbecue his way, not for money or fame, but to bring delicious barbecue to the people.

After two bites of The Anacapa sandwich, one of the restaurant’s more popular sandwiches, it’s clear that he has succeeded. Horseradish mayonnaise, pepper jack cheese, and caramelized onions aren’t initially something that attracts me to eating this barbecued bonanza of taste—I usually go for the tri tip or pulled pork sandwiches drenched in spicy and sweet sauce much like the BBQ Kansas City style pulled pork sandwich—but I wasn’t disappointed.

The tri tip, grilled to a warm medium-well done perfection on mesquite wood, was juicy and well-seasoned. The horseradish mayo added a sweet tang to each bite and honestly, who doesn’t enjoy the cheesy goodness of pepper jack cheese? Even when the meat ran out and all my sandwich was just bread, mayo, and cheese, it was still the most delicious bread, mayo, and cheese I’ve ever known.

There are nine sandwiches to choose from as well as Gould’s famous chili and classic baby back ribs, but don’t think that as a vegetarian you’re never destined to set foot in this establishment—grilled portabella mushroom sandwiches and grilled veggie burgers are also options. I didn’t try either of them but if they’re even half as good as that Anacapa I had, I can guarantee you won’t be disappointed.

The whole delicious experience only cost a total of $8.70, a price that, as a broke college student, I first balked at, but after eating, I was content with. In fact, everything on the menu is under $10, a reasonable price considering that anything Gould can make from scratch, he does, and he strives to buy as many local or organic ingredients for his entreés as he can.

My only complaint, besides the décor (which I’ve been told is being remodeled in the coming months), was the low temperature of my fries when I got them. When I brought that up to Gould the next day though, he was apologetic and made a note to figure out how to amend that shortcoming.

I really enjoyed this restaurant and I’m excited to see what kind of things Kaptain’s Firehouse and Study Hall can bring to Isla Vista in the future. If anything, though, at least now I have somewhere to get a delicious barbecue sandwich that doesn’t break the bank.

Photo Courtesy of jeffreyw (Not a photo from establishment)