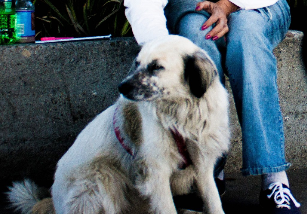 Study partner, workout buddy, wingman, confidant: dogs play a huge role in the Isla Vista community. Recent reports, however, show that certain approaches to taking care of these furry friends may be more successful than others.

When asked who is to blame for letting dogs loose she said, “the animals are generally coming from the college student population.” Annually, she added, there is a wave of dog abandonment at the beginning of summer break.

“It’s illegal, immoral, and it just shouldn’t happen,” Glick said. “Students need to consider if having a dog is right for their lifestyle.”

“I don’t know if it’s for every dog, but it’s definitely for Tyson,” said fourth-year environmental studies major Eric Eulau of his dog Tyson’s IV lifestyle. “He probably roams around everyday, but he’s trained well-enough that he knows ATO is his home.” When Eric chose to adopt Tyson 3 years ago he did so because “it’s a college town, people are a lot more easy-going if a dogs get out.”

Dogs who do go astray and are later picked up by Animal Services typically look like Eulau’s Tyson—pitbull or pitbull mixes taking daytrips that are in violation of the Santa Barbara County leash law. “When we pick up a dog our goal is always to return them to the owner,” said Glick. If the owner cannot be contacted and the dog is impounded, there can be fees associated with retrieving said dog back if food and mandatory vaccinations are administered.

One of the lifestyle choices Glick mentioned is your budget. When Eulau and I talked numbers, he said that the best-case scenario is that you spend around $600 for three years on start-up fees and maintenance of your dog. Then you need to factor in the cost of food, which can be around $30 monthly. Crandall said he typically “leaves Petco with a bill anywhere from $30 to $100.” If they get sick, which Eulau said occurred a lot in the beginning, a consultation is around $70 and an emergency room visit is $200.

While Tyson is flourishing in the cooperative care of the fraternity house, Nathan Crandall, a fourth-year computer science major, said “95 percent of the time it’s just me taking her out,” of his 11 month-old German Shepard Whitney. “I’m always worried I’m going to leave for an hour and come back and my housemates are feeding her beer,” Crandall said. Crandall has yet to walk in on Whitney doing a beer bong, but he did say that even after asking them to stop, “I would come home to a room filled with smoke.”

“Students don’t realize that their housemates can be irresponsible when they put them in charge of their pet,” said Glick.

Dog personalities are nearly as variable as the human ones in IV. Perhaps, there are housemates that can be trusted with a dog, and others for whom a goldfish is plenty to handle.

I met Alpha, a sweet miniature-something dog, in front of the ATO’s senior house. I went inside the house to find the owner to ask some questions about her, but the place was empty except for the previous night’s party supplies. Alpha and I and were formally introduced by a neighbor who took the dog into her possession until the owners got home.

Contrary to presumption, Glick said that IV’s housing-challenged citizens are not to fault for stray dogs. “The homeless typically stay close to their dogs all the time.”

BJ, a black mutt with chocolate eyes is one such dog that has watched 16 years go by in IV’s parks. I met BJ in the middle of an acoustic jam session nestled behind St. Brigids Fellowship, a homeless shelter on Embarcadero Del Mar. His owner, homeless IV resident “Survivor,” said that everyone takes cares of BJ and that the cops, “they all know BJ.”

“This dog has been here forever,” an intrigued homeless observer chimed in, “he’s older than any dog you see walking the streets.”

“No dog left behind” begins with reaching a consensus between housemates or friends as to who can be held responsible for the dog. Whether it is the house commune setup, the single parent approach, or the homeless 24-hour companion method, selecting an approach that fits both the owner and the dog’s personality is key to keeping IV’s growing dog population out of the shelters.

For those with a new puppy or grown dog, in a bind with money and scared to ask parents, Animal Services provides referrals for affordable spaying, neutering, and vaccination services.