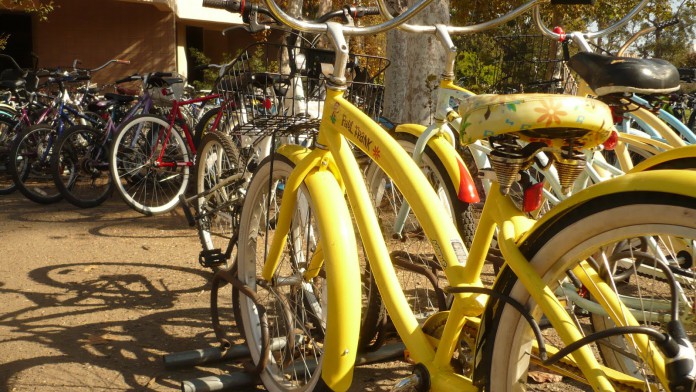 As a total newbie to the University of California Santa Barbara, I showed up this summer knowing that I would need to find a good and affordable bike. So I purchased my bright, nearly blindingly orange cruiser with very little knowledge of the bike culture surrounding Isla Vista and UCSB. Let’s just say I quickly learned the way of things as I was immediately thrown into the bike scene of herd-like Los Angeles traffic, high speed NASCAR crashes and the very unappealing threat of bike theft. My first day of school was not only an introduction to academics but also a brutal awakening to the biking world of UCSB.

This summer I found myself biking everywhere. I was biking to Freebirds. I was biking to the library, to the beach and to the bookstore. I found myself checking out the scenic Obern bike trails. I even biked to Arroyo Burro Beach (Hendry’s) on a very brave day; my legs are still sore. But with all this biking and with so many bikers and bikes, it got me thinking—is a cruiser the right bike for me, and what the hell are those things zipping by me every day on the bike path? What bikes prove to be the best, and why? The gist of my investigation has brought me to five types of bikes: road bikes, mountain bikes, fixies and cruisers.

Third-year psychology major James Thurston talked to me about the mysterious death trap known as a fixed gear, commonly called a fixie. “It’s an awesome single gear bike. It’s very light and fast but it doesn’t have brakes.”

Thurston went onto to say, “It’s definitely very exciting to ride because it’s pretty dangerous. You have to think ahead and know if this person crashes ahead of me where am I going to go?”

Still not over the idea of no brakes, I asked if there had been any close calls by which he said, “Yeah definitely with those cars. If they dart out in front of you, you have to jump off your bike or smash into them.” Thurston concluded by saying, “A fixie is a fun bike but it’s not for novice riders. You should get used to a mountain bike or something like that first.” So, respect and props to you fixie riders; they’re not for the faint of heart.

The next bike I explored was the mountain bike. Fourth-year environmental studies major Alex Camille told me she has a mountain bike with a cruiser seat. When I asked her if she liked her bike Camille said, “Yes, I like my bike. I like it based on convenience. It’s dark green so that shows I don’t care what it looks like.” Then she compared it to a road bike, stating,“Road bikes are a lot lighter but I don’t have to worry about riding on dirt in my mountain bike. I can do whatever I want.”

The idea of having no restrictions sounds very appealing, so maybe my next bike will be a mountain bike—but please, with some gears.

Bike theft is a blatant issue at UCSB, along with the multitudes of obstacles bikers have to dodge while on their way to class, home or even Freebirds.  Fourth-year sociology major Daniella Florant told me that in her first quarter at UCSB, a Prius backed into her. She emphatically warned me, “Beware of the f*cking Priuses!” Or as Florant likes to calls them, “the silent killers.”

The last thing Florant told me was, “The nicer the bike, the more likely it is to be stolen. Having a rusty bike means you know what you’re doing.”

I am currently putting dirt and rust on my bike as you read this.

So what’s cool to ride? From what I gathered, it depends on its use and purpose. If you like to ride long distances, a lightweight road bike and some gears would suit you. If you want versatility, a mountain bike might be something to look into. If you want a fast and thrilling ride, check out a fixie.

It seems to me that the “coolest” bikes are the ones that appeal to each person. And so I am reassured that my blinding bright orange cruiser is the bike for me. You’ll know me if you see it; it’s that orange and that cool.