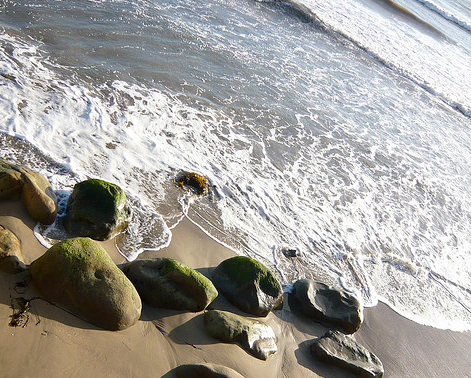 Isla Vista was not built in a day. It took geological time for IV to rise from a beach to a beach-side mesa and millennia before European colonization ravaged the Chumash settlements on its bluffs. But through 19th century Mexican ownership and a few failed stints of farming and asphalt mining in the early 20th century, Isla Vista remained almost completely undeveloped at the end of World War II. In 1948, when the University of California Regents acquired a Marine base on the east end of the bluff to build a Santa Barbara campus, IV’s most regular residents were goats and cows.

The development of Isla Vista from pasture to present has been a turbulent and variegated process shaped by remarkable struggles to define its trajectory. From bank burnings to community gardens, police riots to public sit-ins, building occupations to all-out street warfare, Isla Vista’s history is the story of how a little town by the sea, cynically thrown together by proprietors chasing maximum profits, became a community through the insistently defiant pride and dreams of the students and residents that lived it.

The official opening of University of California Santa Barbara in 1958 and steadily growing enrollment rates in its first years fuelled a building boom in neighboring Isla Vista that would have momentous consequences for the emerging community. In anticipation of a lucrative student-housing market, a handful of Isla Vista landowners (many with connections to offshore oil ventures and all with significant influence on Santa Barbara County Board of Supervisors) hatched plans to zone the area so that they could extract maximum profit from it. Using their political leverage on the County Board, they designed and pushed through a custom-made “Student-Residential” (SR-2 and SR-4) zoning ordinance for IV that permitted a density of residents unheard of in California#. In a speech given in support of the casually crammed zoning order, an IV developer poised to profit from it offered that, “students arrive with a back pack and a surfboard#.”

Through these dubious dealings, the UCSB administration remained ominously absent. Despite pressure from IV residents and planners for the University to supervise IV’s rapid growth, the administration made clear that it did not wish to “interfere with the private affairs of any developer in this area#.” Where the administration could have taken IV under its wing—the way UCSC and UCSD have with their neighboring communities—it chose instead a hands-off approach to keep focus on building the young university’s academic prestige#.

With bare-minimum regulation in place and university oversight absent, IV grew at a reckless speed in the 1960s as developers threw up shabby housing units and charged student-tenants exorbitant rates. “We’ll build until we run out of room,” one cheerful developer explained#. Most developers and investors did not live in Isla Vista, and in the boom there was virtually no planning for public services or community health. The new Isla Vista had sewage problems, no public parks or transportation, inadequate parking space, no medical services and a peculiar absence of sidewalks and streetlights. In this first decade of development in the 1960s, IV came to resemble an urban ghetto in many respects: isolated, with a transient population, absentee-owned housing and with a police force that patrolled the territory with a heavy-hand.

As students settled into Isla Vista’s bedrooms and beaches, however, they made something new of the haphazard town. A series of student-led actions at UCSB and in IV roughly over the years 1968-1974 changed the trajectory of development in Isla Vista radically— it went from one dominated by powerful elites and headed toward slumhood, to one concerned with democracy, community wellbeing and collective self-determination.

This surge of activism in IV and on campus was motivated by national as well as local concerns. In the late 1960s and early 1970s, America was going through a full-fledged social crisis in which many structures of authority and order appeared to be breaking down; there were massive protests against the Vietnam War, increasing violence surrounding the civil rights movement and uncontrollable urban unrest. Young people, who were central to these movements, were simultaneously incubating a decidedly anti-authoritarian counterculture that challenged established values and lifestyles. To many, the whole edifice of American life appeared to be crumbling.

The crisis was palpable in IV as well. The catastrophic 1969 Santa Barbara oil spill, rampant police misconduct and brutality and an abhorrent housing situation hit students hard. In the face of these and other offenses of authority in IV and around the country, Isla Vistans rose up in a flurry of actions that confronted the powers-that-be and asserted their rights to democracy and self-determination.

In the fall of 1968 underrepresented black students occupied North Hall and successfully demanded the introduction of a Black Studies curriculum at UCSB, starting a wave that swept campus and town for years to come. Through the 1968-69 and 1969-70 school years students continually challenged their marginalization by the social institutions that shaped their lives—the most immediate of which were the police, the landlords and the university—through creative and dramatic direct actions. On campus they launched massive protests outside of Cheadle Hall in defense of a popular professor, boycotted class and occupied the UCen for weeks. They challenged the police and landlords’ right to rule in Isla Vista through three riots that gained international attention. Students fought pitch battles with cops in the street, smashed and ignited patrol cars and vandalized and destroyed realtors’ property.

The flagship event of the era occurred on the night of Feb. 25, 1970, in the first of three riots that shook IV that winter and spring. After hours of street warfare sparked by an incidence of police brutality, students successfully chased all law enforcement out of IV by 9:00 p.m. After IVs entrances had been barricaded, “there were hours at a time when there was nothing to do but enjoy being in liberated territory,” one student explained. In this carnival-esque atmosphere, a group gathered around the Bank of America building (where Embarcadero Hall is today). The BoA had been a recent target of accusations by Associated Students for its investment in war industries and was, as one UCSB student put it, “the biggest capitalist thing around.” Students smashed its windows and tore it apart from the inside before burning it to the ground.

Despite international news coverage and a temporary occupation by the National Guard, unrest continued in IV for months after the BOA burning, climaxing in a massive public sit-in on June 10, 1970, in which nearly a thousand Isla Vistans collectively defied a sundown curfew. The sit-in proved to be a watershed moment for IV’s development as community members, unified, took on a new consciousness. A young sociology professor, Tom Scheff, captured the sentiment, stating, “We must continue to fight those who oppress us, but we must at the same time create what we can for ourselves…we must live the revolution in our personal lives, in our community. Isla Vista is not yet ours, but we can make it ours if we pool our creativity and our energy and our commitment.”

And so a new kind of construction began in Isla Vista. Unlike the cynical development that characterized IV during the development boom, these new creations were social in nature and concerned with collective wellbeing. As a contemporary activist explained, “[there] was a tremendous sense of purpose generated, we were remaking a new society.” What followed in the early years of the 1970s was an efflorescence of alternative community institutions aimed by the people at improving the local quality of life.

The gains made during this period have been indispensable for the Isla Vista community since. Students built a slew of community institutions to address IV’s needs and problems: cooperatives for food, housing, health, books and finance; the IV Recreation and Parks district, which built nearly every one of the 15 parks we enjoy today, and even the unique Isla Vista Foot Patrol, created to increase police-community dialogue. These institutions have significantly amplified student voices and input in the subsequent development of IV.

Isla Vista’s story continues, of course. Some of the gains made in the 1970s have eroded, while other battles have been fought and won. What is important to understand is that the Isla Vista we know today was not created in a vacuum; it has been shaped by ever-changing balances of power, produced by the actions of those people who engage with it—whether they are powerful landlords and police or residents at the grassroots. The future of Isla Vista is wide-open and we, the people, have the power to make its history our own.