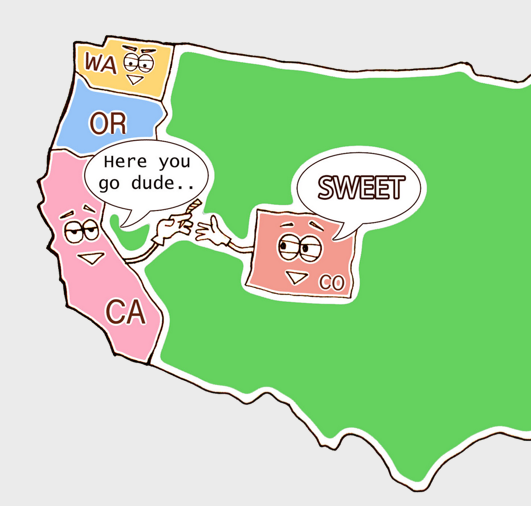 California may not be the best place to light up the chronic anymore. On Nov. 6, Washington and Colorado each passed ballot initiatives legalizing marijuana for recreational use. In light of these controversial ballot initiatives, seeing ganja in peoples’ homes and weed in store windows may no longer be a shocking occurrence.

According to the Los Angeles Times, the initiatives passed 55 percent to 45 percent in each state. The legalization of the possession and sale of cannabis for those ages 21 years and older is very much based on the national system for the sale of alcohol. Advocates for recreational use argue that marijuana has been proven to be safer and less physically dangerous than alcohol.

Jackie Kurta, Director of the Alcohol and Drug Program at the University of California Santa Barbara, suggested that the legalization of marijuana in these states does not give license for unregulated and uncontrolled usage.

“There is a misconception that because marijuana is legal, it means it’s safe,” said Kurta. “People need to be properly educated and use substances with caution. The fact that it can affect people in many different ways is one reason why medical practitioners question the assumption that marijuana use is insignificant.”

The health ramifications of marijuana have been a subject of intense debate, and there is much diversity of opinion on the subject. Kurta acknowledged the unreliability of patients requesting marijuana as a prescribed medication.

“Medical patients often have self-diagnoses of anxiety, depression and insomnia to seek out marijuana and alleviate their ailments,” Kurta said. “Many actually do find relief and see marijuana as a welcome release from mental stress.”

The duplicity of this issue is on the variance of marijuana’s effects on individuals. Kurta cited her colleague Dr. Feliciano as being familiar with “connections between marijuana and incidents of psychosis—an impairment or mental block to recognize reality.”

Progressive proponents of the proposition argue that the market for marijuana will provide a highly valuable revenue stream to budget-strapped state governments and diminish the heavy weight of non-violent drug offenses on the bloated and vastly expensive jail system. With the steady rise of illegal marijuana importation to the United States, many hope that an expansion of lawful use will diminish the threatening violence associated with cartels and criminal trafficking.

Last school year, the Santa Barbara storefront medical marijuana dispensaries closed under the threat of raids and asset forfeiture by the federal government. The history of medical marijuana is rooted in California (it was the first state to condone therapeutic usage), so many suggest that the system of collectives and dispensaries will provide a model for Washington and Colorado.

“Many dispensaries and delivery services located in California have the option of transferring to a recreational marijuana facility in a legalized state,” he said.

The most discussed controversy over the legalization of pot is how Colorado and Washington will be at odds with Washington D.C.’s strict laws on the manufacture, sale and possession of certain classified substances. According to the New York Times, marijuana is still a Schedule 1 Controlled Substance, though its sale for medicinal use has expanded to 16 states and the District of Columbia.

The question still remains as to whether the federal government will step in to quash the states’ attempts to classify a controlled substance as marketable product. With many questions regarding the constitutional limits and degrees of state authority, there is little doubt that these propositions will have resounding repercussions.

The expansion of legal marijuana use beyond a medical purpose ultimately provides for the commodification of the product; it opens up the opportunity for marijuana to be produced, regulated and sold as a smoke-able, ingestible cash crop, very much like tobacco. “Marlboro Greens” is common fodder for many drug conspiracy theorists. Many regular smokers and counter-culturists suggest that legalization provides multinational companies with the opportunity to gain unspeakable profits off a previously illegal market.

With the advent of more potent strains of marijuana, new techniques of ingestion (such as edibles and tinctures) and the availability of concentrates, the strength of cannabis products is of particular concern to law enforcement and public safety agencies. The slow progress of marijuana legalization can be paralleled with alcohol yet again—with the eventual repeal of prohibition.

Proponents of limited government and the efficacy of personal choice see legalization as a victory for liberty. In time, these events have the potential to provide the impetus for the expansion of marijuana as an industry throughout the entire nation.