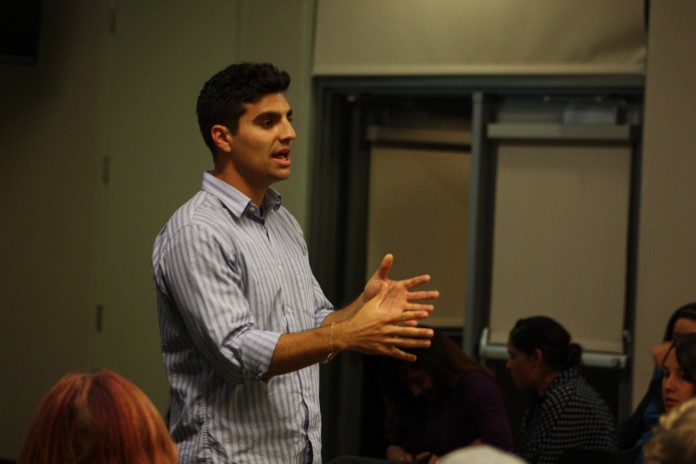 University of California Student Regent Jonathan Stein visited the UC Santa Barbara campus on Nov. 16 to discuss the Regents, the passage of Proposition 30 and the future of the UC system. Concerns about decreases in government funding and the UC Regents’ response to the resulting budget gap dominated most of the conversation.

Proposition 30 passed the Nov. 6 election with 53.9 percent of the vote and ensured that UC students would not have a 20 percent mid-year tuition increase. Stein said that Proposition 30 helped the UC budget crisis, but did not resolve its core problems.

“Proposition 30 is not the solution,” said Stein, “but it is the beginning of actual reinvestment in higher education and my hope is that it is a turning point. It is a signal from voters to the legislature that California cares about higher education and it has to be taken care of.”

The Regents are currently discussing options beside tuition increases to help address the budget shortfall. Some options, such as increasing out-of-state student enrollment and changing the financial aid system, are still being discussed. Stein expressed his concerns with using out-of-state tuition to cover the gap.

Stein said his concerns on this issue have been mostly ignored by the Regents.

“Every single time at the Regents meeting, Cinthia [next year’s Student Regent] and I raise red flags and talk about the consequences,” said Stein, “talk about this as an institution built by Californians for Californians and everyone sort of listens to us and moves on…This is one where it feels like the administration has a train headed down tracks. They’re barreling towards more out-of-state students and there’s very little that we can do to stop them.”

UCSB Associated Students President Sophia Armen said that expecting Stein to stand for the voices of 200,000 UC students is absurd, and that the Regents have a reason to listen to the complaints of students.

“It is students who will be the deciding factor,” said Armen. “These folks have no excuse to not invest in our future.”

UCSB’s External Vice President of Statewide Affairs, Nadim Houssain, said that Stein offered UCSB students the chance to speak with someone who could relate to them easier than a Regent.

“To have a Student Regent that could relate to their struggles, to their experiences, come and speak really helps verify things for them,” said Houssain. “A few slides…made me realize that the UC, while it is kind of diminishing in accessibility…it is very valuable and in comparison to many other colleges in the nation, I think we’re doing pretty well in terms of quality.”