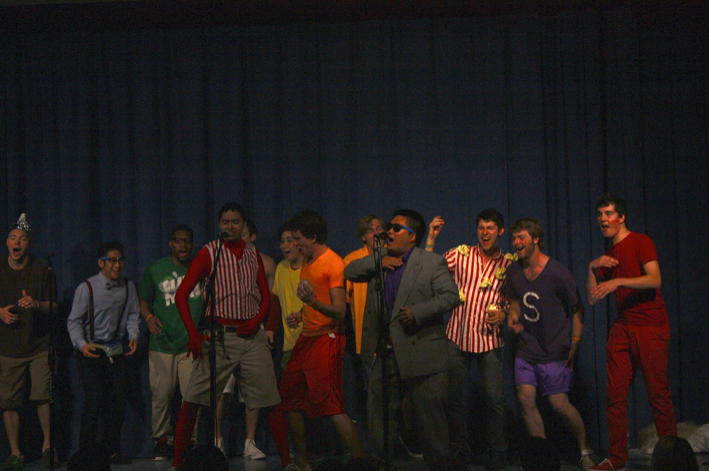 Everyone with a sweet tooth for a cappella made their way to Embarcadero Hall on Saturday, Nov. 17 for Brothas From Otha Mothas’ fall concert, “Nutters From Other Butters.” Dressed as sweet treats and junk food, the 16 members of BFOM performed a 12-song set of expertly coordinated, highly entertaining, and beautifully harmonized a cappella.

Opening for BFOM were the three other University of California Santa Barbara a cappella groups: Intervals, Naked Voices and VocalMotion. Naked Voices and VocalMotion dressed up alongside the Brothas as a colorful box Nerds and a troop of Girl Scouts, respectively. After each group delivered two songs, the long-awaited Brothas took the stage. Among the Brothas was a Red Vine with a licorice whip, a fig Newton, a jawbreaker and popcorn. Fourth-year Ryan Jacobson was dressed as a Hershey’s Kiss, complete with a homemade foil wrapper atop his head. While explaining all of their outfits, Jacobson said, “Now, no aliens can read my mind.”

BFOM started the afternoon with Queen’s “Fat Bottom Girls.” Soon followed a cover of Cee-Lo Green’s “F*** You,” led by Evan Schindler. After the song ended and 18 F-bombs had been dropped, Kyle Leon said to the audience, “that was probably a really offensive song.” A couple of up-tempo songs followed before the brothas slowed the set down a little. At that point, Ian Charbonet took the mic and announced that the concert was dedicated to David Propp, the UCSB student and BFOM member who recently died. BFOM then delivered a Red Hot Chili Peppers medley in honor of Propp, which included a smooth mash-up of “Under the Bridge,” “Californication,” “Can’t Stop” and “Scar Tissue.”

Automatic “aws” from every girl in the audience followed Connor Greene’s solo of “Sweet Pea” by Amos Lee; dressed as an orange Starburst, he made the ladies swoon after he dedicated the song to his girlfriend sitting in the audience. Soon after, Daniel Park led BFOM in their rendition of A-Ha’s “Take On Me.” Dressed as a stick of butter, Park earlier explained he thought the theme of the concert was “butters from other udders.” Park hit the high notes in the song with ease and made the audience laugh with his dance moves that were as smooth as his voice. The group caught the audience by surprise, though, when “Take On Me” suddenly broke down into “BFOM Dubstep”. Almost indistinguishable from the real song, the Brothas dropped the bass and even included the infamous “Oh my god!” from Skrillex’s “Bangarang.”

The last song, a flawless rendition of Lonely Island’s “Motherlover” that was led by Adam Courtin and Mike Newsom, provided the biggest laughs of the concert. Every member in the audience was almost in tears as Courtin and Newsom performed the song effortlessly and captivated the audience with their choreography.

Eruptions from the audience for an encore brought BFOM back on stage after they initially ended the concert; ready to please their dedicated fans, they sang Lady Gaga’s “Bad Romance” and later mashed it up with “Gangnam Style” as Park joined the Brothas on stage. An impressive amount of choreography impressed the audience as all of the Brothas transported the audience right into the Gangnam style video.

What I’ve taken away from this is a word of advice for guys: if you want girls to adore you, you need a funny costume and, even more than that, a fantastic voice. I’m sure the Brothas can attest to that, and those in the audience at their concert would not hesitate to agree with me.