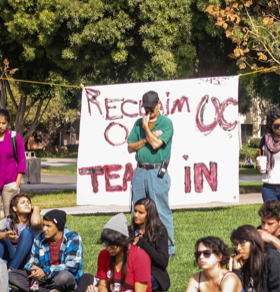 “Power is why we are here today,” Megan Foronda, third-year sociology major said to the crowd. “It is time for us to stand up and reclaim our university and really change the dynamics of power.”

Foronda kicked off a two-hour teach-in demonstration in the Arbor on Wednesday, Nov. 14, organized by campus organization “Students Against Student Suffering,” which brought together students, campus workers and faculty to share knowledge about the University of California’s fiscal policies and encourage activism to influence it.

During the two-hour teach-in, UC union representatives, undocumented students, UC Santa Barbara professors and a Chilean university student, among others, spoke of the ongoing challenges UCSB faces, as well as those of public education in general. Speakers addressed rising student fees and debt, UC service workers’ fight for a fair union contract, the unaccountability of the UC Regents system and the global trend towards privatization of higher education, calling on people to “connect the dots” between these struggles to build stronger networks of activism and solidarity.

“What this teach-in served for was first of all to educate ourselves,” said Associated Students president and teach-in organizer, Sophia Armen. “We have to be equipped with knowledge before we take action.” Armen gave a PowerPoint presentation during the teach-in detailing the unequal balance of decision-making power in the UC system, while Foronda gave a run down of the UC’s fiscal history. Representatives of American Federation of State County and Municipal Employees (AFSCME), the UC service workers union, also shared information regarding their struggles for better compensation, stressing common interests with students and calling for solidarity.

“The UC wants to pit workers against students,” said Sandra Lopez-Martinez, an Executive Board representative of AFSCME who attended the teach-in. “We don’t want that. Together, [workers and students] are strong.” AFSCME, which represents service workers from custodians to health care attendants on all 10 UC campuses, is currently in negotiation with the UC Regents over a new union contract. According to AFSCME, UCSB has not hired any new workers to match the school’s growth in recent years, putting an even greater burden on already overworked and underpaid employees.

Juan Donato, a UCSB groundskeeper and AFSCME member, explained why the union struggle is tied to student concerns.

“Education is our future and we are here to support the students’ education,” Donato said. “In order for us to provide the structure [for UC education], it is important that we are also strong.”

Alongside workers, students expressed concerns with the perceived betrayal of the UC system to its three tenets established in the California Master Plan for higher education: quality, access and affordability. While the passing of Proposition 30 has stopped the hemorrhaging of UC funding for the rest of this school year, speakers at the teach-in emphasized its limited scope, calling it a “band-aid.”

“The passage of Prop. 30 was imperative,” Armen said, “but we need to understand that the actual structures of decision-making within the university are very much still intact. It was only to mitigate not even our status quo and unfortunately our status quo, for most students, is unacceptable.”

Two speakers, Perdo Leon and Gloria Campos, echoed these concerns by telling the crowd of the difficulties they face as undocumented students at UCSB. They spoke of the strain rising tuition puts on them and their families. Unaffordable fee increases forced Campos to temporarily leave UCSB while she saved up money by taking courses at Santa Barbara City College. For Leon, each increase puts more pressure on his family’s budget, and more guilt on his mind.

“Every tuition increase I ask myself, is it worth it?” said Leon.

Leon noted that raises in student fees are of particular concern to undocumented students who already hold a somewhat precarious status.

“If they continue to go up,” Leon said, “all the undocumented students will be out of here. My dreams, my sister’s dreams and my family’s dreams will all be out the window.”

To address these concerns and successfully provide an affordable and quality public education, Donato believes worker-student solidarity is indispensable.

“Nos unimos o nos hundimos,” he said. “We unite or we sink!”