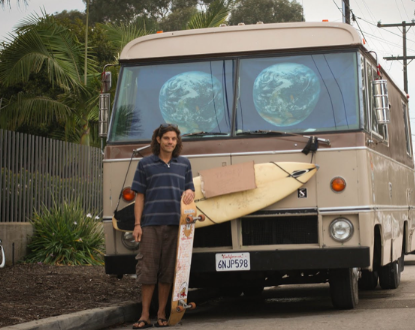 Finding a place to live in Isla Vista can be quite exciting—unless you’re forced to renew your lease every 72 hours. For some Isla Vista residents, this proves to be the case as the county’s parking ordinance prohibits them from parking their mobile homes in any given location for more than three days.

Bryan Semones has made the streets of Isla Vista his home for the past two years; the 39-year-old has been living out of his mobile home after tragedy and misfortune left him with no home to call his own.

“I was home-invaded by people I knew,” said Semones. “I was jumped and beaten up.”

Following the robbery, he struggled to make ends meet and was forced to begin living in an RV, which he had received as a gift and had been sitting in his backyard during the robbery. “After the initial robbery, I lived in the Safeway parking lot for about six months,” he said, until finding his way up the coast and settling in Isla Vista. He says Isla Vista has provided a place for him to find peace and finally heal both physically and mentally.

While some may draw parallels between motor home dwellers and the flagrant stereotypical depictions of drug addiction from television shows such as “Breaking Bad,” Semones aims to dispel those notions. A self-made business man of sorts, he repairs cell phones and assembles bikes in his RV, selling them both to locals and customers online. When he’s not working, he may be surfing the beaches, skating down Del Playa on his longboard or simply sharing a cup of coffee and gluten-free macaroons from the Isla Vista Food Co-op. Bryan’s story is one of many, posing a daily challenge to people’s tolerance of humanity.

For those on the 6700-6800 blocks of Del Playa, the scattering of mobile homes in the street might catch their attention. Though the vast majority of these RVs and mobile homes are located toward the far end of Isla Vista, away from the densely populated community, many residents voice complaints about their unwanted presence in the residential area.

Santa Barbara Sheriff’s Parking Enforcement Officer Marcia Nielsen has worked for the county patrolling the streets of Isla Vista for the past 13 years.

“People that live out here don’t like to see motor homes that are not really nice motor homes and I do get complaints, I do get calls[…] especially out towards the end of Del Playa and Sabado in the 6800 block,” Nielsen said.

Their presence, however, is not wholly prohibited, granted they relocate their vehicles every third day. The county’s parking ordinance formerly stated that vehicles could only park in any given location for a maximum of 120 hours, but was recently amended to its current terms by the Board of Supervisors at the beginning of October. As a result, these “RVers” have been forced to reduce the length of their stays and adopt an even more vagrant lifestyle.

They have become modern nomads, challenging modern ideals of privilege and tolerance. Many of them travel from city to city. Many have nothing more than the basic tools required for life. This sort of minimalistic lifestyle that is often rejected in many other areas has been relatively welcomed in Isla Vista.

Second-year Santa Barbara City College students Tyler Canning and Noah West currently live in a house on the end of the 6800 block of Del Playa, where the RVs tend to congregate.

“It doesn’t bother us at all that they’re out here, I mean they’re not doing anything and I guess it’s a cool spot to live if I was to live in a trailer,” said West.

Recent regulation in downtown Santa Barbara and Goleta enforcing the prohibition of RV parking has led to an influx of RV and motor home dwellers in Isla Vista over the past few years.

“People that have the motor homes have rights, they can park on the streets just like anyone else,” said Officer Nielsen. Those that fail to comply with the county’s parking ordinance, however, are subject to citation; once six unpaid citations have been accumulated, they face the risk of having their vehicles towed.

“That’s what they were doing to the RVs in Isla Vista before things changed,” said Semones. “They were ticketing you until your vehicle got impounded or you went to jail.”

While Semones and the other RVers may not be well received within the Isla Vista neighborhood, they continue to challenge the notions of both opportunity and entitlement. Semones says he has had his fair share of “Breaking Bad” references yelled out to him by passersby, but that doesn’t keep him from parking his mobile home right alongside all the other houses.

“Whether you like it or not, when you live on the fringe, you’re testing people’s empathy. You’re testing their empathy and their intelligence.”