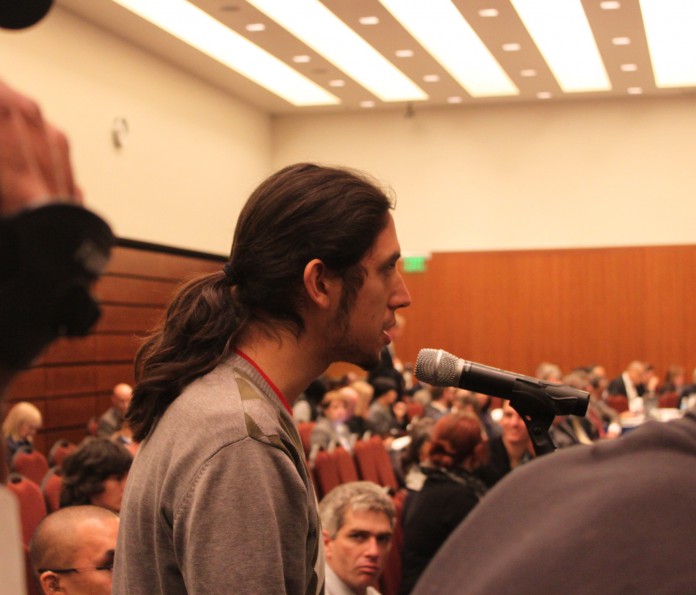 Chairwoman Sherry Lansing and University of California President Mark Yudof opened the second day of the University of California Regents meeting with remarks celebrating the passage of Proposition 30 and emphasizing that this is not the end of their work to get UC tuition levels back to the threshold of 2009 levels. Those who engaged in public comment, however, chose to focus on alleged “risky” insurance swaps which the UC took part in before the economic recession.

With 53.9 percent of California voters approving Proposition 30, the UC system has avoided a $375 million deficit in the 2012-2013 budget and has effectively avoided mid-year tuition increases at this time.

“Because of the passage of Prop. 30, there will be no trigger cut, and there will be no mid-year tuition increase,” said Lansing. “We are so grateful for Proposition 30 but we know it’s not a magic bullet… We must make ourselves more financially responsible.”

“It’s the first time any state in this country has agreed to raise taxes for the sake of education,” said President Yudof. “We’re in a much better place, but it’s not a perfect place.”

With the passage of Proposition 30, the focus of students and community members at public comment was shifted from a lack of funding to an alleged mismanagement of funds on the behalf of the Regents. Students at public commented echoed statements and arguments made in an op-ed ran in the San Francisco Chronicle on Tuesday, Nov. 13.

Adam Goldstein and UC Berkeley sociology student Jacob Habinek co-authored the op-ed and addressed that the “UC Board of Regents has engaged in risky deals with Wall Street banks called interest rate swaps. Banks sold swaps to the university and other public institutions as insurance against rising interest rates on variable rate bonds” and that “swap deals already have cost UC nearly $57 million, with $200 million more in losses anticipated. Of the $250 million UC expects to receive from Prop. 30, some $10 million a year will go to swaps payments unless the deals are ended.”

Sociology Doctoral Student at UC Berkeley Charlie Eaton, along with Berkeley students Jacob Habinek, Mukul Kumar, Tamera Lee Stover and Alex Roehrkasse, assembled a report called “Swapping our Futures: How Students and Taxpayers are Funding Risky UC Borrowing and Wall Street Profits.” The report details issues raised by the op-ed and “the role of interest rate swaps in the University of California’s massive expansion of borrowing from Wall Street over the last decade.”

“The findings of this report is that UC has engaged in very risky borrowing practices over the last decade,” said Eaton during public comment. “One of the most poignant examples is the use of interest rate swaps—risky bets that UC have made in the financial market—that have not paid off. [UC has already] lost $57 million, [and] stands to lose $200 million more.”

Chief Financial Officer for the UC Office of the President Peter Taylor responded to the op-ed as well as many public comments during a presentation to the Board of Regents following public comment.

“There are so many factual inaccuracies in this report,” said Taylor. “Their analysis compares apples and oranges. A number of our unions have come to us to understand our debt program. They [the students who put together the report] didn’t give us the courtesy. We would have been happy to explain why we entered into these and the rational behind it. Some of the allegations in this report are scurrilous and wildly inaccurate.”

Taylor wrote a responding op-ed in the San Francisco Chronicle for publication on Thursday, Nov. 15.

“UC has followed a conservative approach to fund capital and uses two tools to do so: fixed rate bonds, and floating rate bonds swapped to a fixed rate,” reads the op-ed. “UC has only used swaps when the advantage is significant, and when this is comparison is done correctly, it shows that UC has saved more than $40 million through its prudent use of swaps.