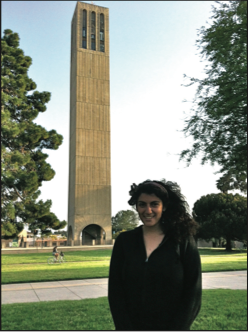 1. What has been the biggest challenge of your presidency?

In meeting after meeting, in the news and in our daily experience, we see the university rapidly changing, as terms like “private use” or, recently, having a conference room named after “Southern California Edison” are the norm, meanwhile some students are literally having to choose between paying that expensive tuition or rent or eating. My other obstacle has been articulating to those who have been directly involved in Associated Students that we are not an extension of Campus Administration, as a matter of fact we are all AS…and too often we have to work and demand from the university maintaining even the status quo.

2. Have your views on the school, it’s government, and its students changed? If so, how and why?

The idea that students should, as experts of their own experience, use their power collectively and take ownership of their university, and have every right and should have every ability to decide its future, is what I maintain consistently. Period. This university was a promise to the people of California; whatever special interests, including the Regents agenda whose priorities are often not in line with the students, we are fighting against this year. It’s important to always keep that in mind. We see that the complete disregard for the Master Plan is not even shameful anymore by Sacramento. Enough!

3. How does the passage of Proposition 30 affect your presidency? Do you have any plans now that it’s passed?

Prop 30 was merely a band-aid. Imperative, yes, but ultimately there just to mitigate…cuts of devastating proportions that would have halted even basic functions of the University and was only a “buy-out” for a tuition hike for this year only… We as student[s] know the day in, day out obstacles we face as classes will get fuller, tuition will be going up and has been exponentially.

4. What effect do you hope your presidency has on the school and the UC system in the long term?

I hope that my term helps change how students understand their own power and that every one student should have a say in their Association and in the university at large. I hope that my consistent checking of power, even my own, within the Association, makes representatives understand that no one has entitlement over Associated Students, that literally AS is the student body.

5. If you could change something about the UCSB campus, its government or its students, what would it be and why?

I want SB to be a safe and inclusive place for all regardless of identity or background. AS does incredible work everyday and services that students need to know about and have a say in the priorities of AS! I am working on having students understand where their fees are going, engaging their opinions in that process and demanding that we have a say in the university at large.