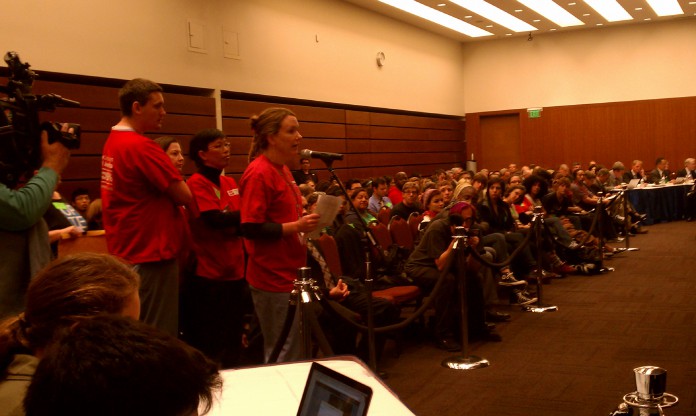 Enflamed nurses, University of California workers and mothers spoke at Thursday’s UC Regents Public Comment session to rally the Regents to increase staff, roll back tuition and consider an actuarial analysis of the UC budget. Protests and chants during the Committee on Oversight of the Department of Energy Laboratories were deemed “Unlawful Assembly” and caused the Regents to recess. The meeting recessed for five minutes and was called back to order at 10:23 a.m.

During public comment, protesters stationed themselves in the conference center courtyard and on 16th street, blocking entrance by vehicle to the meeting. Those who were unable to get on the speakers list for public comment, or who were on the list but had not been permitted to speak because of the half-hour time limit, stationed themselves in the courtyard. Many held signs demonizing the supposed privatization of UC as well as calling for a roll back in cuts and fee hikes, mirroring the previous day’s Regent support for returning student fee levels to 2009 standards.

“I wanted the regents to really respect not only that students actually organized and mobilized themselves just to defend their public higher education every single day,” said one student, DJ, who was on the speakers list but was not given time to speak. “But as students the fact that we shouldn’t have to come out here and spend $6 in toll, $7 in parking, maybe more just to be able to say don’t raise my tuition anymore and don’t raise my fees anymore.”

Austin Pritzkat, a second-year student at UC Berkeley, was also not given time to speak.

“It’s not public comment if all the public is not allowed to comment,” Pritzkat said in the courtyard. “Why do you [the regents] even pretend to care anymore? You obviously do not care about raising tuition, cutting from workers, cutting from UC and privatizing UC. What the UC regents do is egregious and they are trying to privatize the system and by closing out the public they are able to do that.”

Inside, professional students, nurses and community members alike voiced their disappointment with the Regents.

“Hundreds of millions of dollars are going to Wall Street profits while students are on the hook for tuition hikes and cuts,” said Charlie Eaton, a graduate student of Sociology at UC Berkeley after urging the Regents to consider an actuarial analysis of the UC budget created by his Berkeley colleagues.

“I stand here as a Californian who worked my tail off to get Prop. 30 passed,” Lybarger said. “The fact is even thought you say you we have no choice, there is no justification for more cuts and more tuition hikes. They should be rolling back. That’s not my opinion; that’s the math. Between 2008 and 2011, the Regents have awarded $167 million in raises to managers making over $200 million a year.”

Many UCSF workers also raised the issue of being short-staffed.

“Every day, I don’t get my break, I don’t get my lunch,” said Judy McKeever of the UCSF Medical Center Public Comment. “We are so short-staffed that we can’t, because we put patient care first. What would it take for you guys to give a shit? Would it take someone dying? All you care about it the money, and when you get sued, then you care? This is our future, and if they cant afford to go to school, what do they do? Have a heart.”

“I work with people every day,” said Randy Johnson, a UC San Francisco MRI Technologist. “Many of these people are dying. You need me to pay attention to get the best care possible. UC just put out that they are going to eliminate 300 positions. Nurses can’t answer the call lines because there’s not enough people to help them. Their bathrooms aren’t getting cleaned because there’s not enough staff to clean them.”

Johnson went on to an enthusiastic public crowd.

“This is our public university and our students in California should be first,” said Johnson. “UC should be from the top down. Without us, UC would be chaos.”

“I just want to say shame on you,” said the Associated Students President of the City College of San Francisco. “This is not business as usual. It’s shameful that Prop. 30 has passed and you are looking at increasing tuition. Education should be free, first of all. All of you have your degrees. We want that same opportunity. We’re watching you, and we’re coming together.”

Near the end of the Public Comment session, Robin Ryan, who introduced herself as the parent of a high school senior and potential UC student, spoke about the UC world she would soon enter.

“I’d like to trade you all the looming student debt that myself and my daughter are looking at for a spot on the UC Board of Regents,” said Ryan.

Another potential UC parent explained that although her daughter gained admittance to both UC Berkeley and UCLA, she may not be able to attend because of the situation of the UC system.

“You’re gonna drive everybody away,” said the mother. “You need to listen to the information. Don’t be in your own bubble. Listen to ideas.”