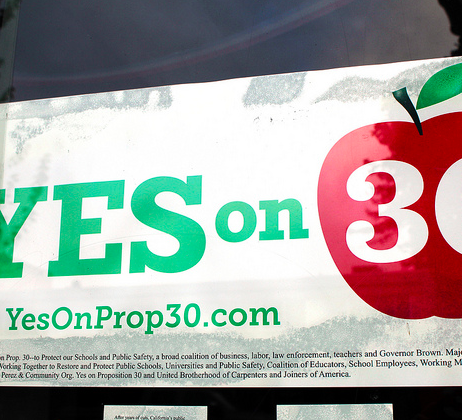 Voters approved the Proposition 30 tax increase, preventing $6 billion dollars in trigger cuts to public education in California on the United States’ election day, Nov. 6. Despite strong student support for the proposition, the specifics of how Proposition 30 will affect Californians in the short and long term may still be unclear.

One immediate effect of Proposition 30 is that it will raise the sales tax in California, already the highest in the nation, by a quarter of a percent for the next four years. It also raises personal income taxes for seven years in increasing increments for any additional money an individual makes above $250,000. For example, people earning between $250,000 and $300,000 will pay 1 percent more on their taxes while those earning between $300,000 and $500,000 will pay 2 percent more, and so on. These personal tax increases are retroactive on income earned in 2012 and are expected to generate the $6 billion that many public institutions were already counting on before the proposition had even passed. This means that most public schools will not see an immediate change in classes or funding and that the improvements to public education are likely to be achieved only very gradually.

An often-overlooked aspect of the proposition, however, is not what it does but what it prevents from happening. Had Proposition 30 failed, it is speculated that many K-12 institutions would have had to cut the school year short by 18 days in order to recover from budget cuts. State Superintendent of Public Instruction Tom Torlakson spoke about the crisis that public education had narrowly avoided.

“Passage of Proposition 30 means parents and students across the state can breathe a collective sigh of relief, knowing that our schools will have the resources to stay open for the remainder of the year,” said Torlakson. He also cited Proposition 30 as the measure preventing “the chaos of waves of pink slips, of disruption, just demoralization of the teaching workforce,” as well as preventing $1 billion in state funding which would have been cut from the budget as soon as this December.

In a web chat on Nov. 2 between UC President Mark G. Yudof and other University of California faculty and staff, Yudof reported that if Proposition 30 failed, the UC schools would immediately see $375 million dollars in trigger cuts which would have undoubtedly led to a mid-year tuition hike of about 20 percent, or $2,400, for UC students. Since Proposition 30 was approved, these increases in tuition will not occur just yet; however, UC regents will soon vote on whether to increase supplemental fees for graduate and professional degrees earned within the UC system.

A recent report by the Attorney General anticipates that the proposition will ultimately generate $6 billion dollars annually beginning with the current school year and continuing until 2016-2017. UC Santa Barbara’s own Chancellor Henry Yang explained the significance of the passage of Proposition 30 in regards to the school system’s budget.

“Prop 30 enabled UCs to avoid the trigger cuts that were built into the state’s 2012-13 budget, which would have meant a reduction of $250 million to UC’s budget this year,” said Yang. “We are still facing significant budget challenges resulting from several consecutive years of state budget cuts. State funding for UC has dropped by nearly $900 million (or about 27 percent) over the last four years. Prop 30 did not restore this lost funding; rather it prevented additional, deeper cuts from taking effect.”

With the California education budget in its current depreciated state, it seems that students, parents and school officials alike will simply have to wait to see any readily apparent improvements to public educations as opposed to its previous trend of decline.