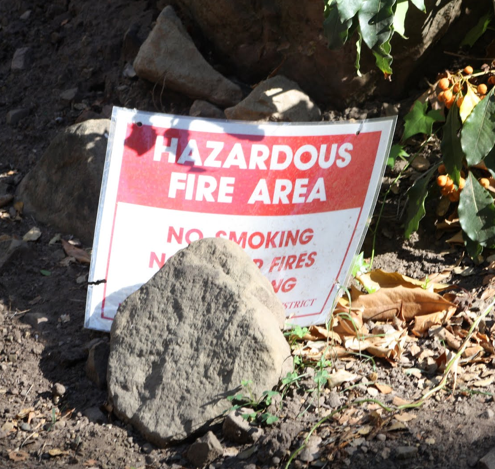 A fire started in the upper hills of Montecito around noon on Nov. 6. Evacuation orders were issued in the area surrounding the Cold Spring trail shortly after the blaze started.

The fire was quickly contained and evacuation orders cancelled three hours after the start of the fire. The Cold Fire caused no damage to the surrounding homes and there were no reported injuries. Geri Ventura of the Montecito Fire Protection District commended those involved in the containment for their quick actions to ensure the fire did not spread to residential areas.

“I believe that the response was fast and appropriate,” said Ventura. “We were fortunate that there were no other incidents going on in the area, which availed several air resources that were able to continually douse the fire with water and retardant. Because there were no winds to speak of, the fire’s progress was not pushed at the speed in which we have seen with some of the other local incidents, like the Tea Fire and the Jesusita Fire. This particular fire was driven by the topography.”

The Montecito Fire District, Santa Barbara City and County Fire, United States Forest Service, Carpinteria and Summerland Fire, Vandenberg Air Force Bases and others responded to the fire, as well as volunteers who were there to assist with any necessary evacuations.

The Santa Barbara County Fire is currently investigating the fire as arson, and an unidentified man was detained on suspicion of starting the blaze. Ventura said he has not received any information on whether or not they’ve identified the suspect.

The blaze did not stop hikers from returning to the trail once the fire was contained and extinguished. Shannon Daniel, a resident from Oxnard who regularly travels to Montecito to hike the Cold Springs trail, said that she was initially very worried because the trail is one of her favorites, but that was happy to return once the area was deemed safe. Daniel said the recent upkeep of the trail and the homes surrounding it help ensure her safety, as well as that of fellow climbers

“It looks like they’re keeping it clean,” said Daniel.

Ventura said that while this fire was quickly contained, residents should still be vigilant and wary of the potential for disastrous fires.

“We cannot stop a wind drive fire,” said Ventura. “We can only try to protect those structures that lay in the fire’s path. In a slope-driven, or topography-driven fire like we had the other night, we can more aggressively attack the fire to prevent its spread. We recommend that residents pay close attention to the weather, and take precautions for themselves when the ominous trifecta of high temps, low humidities and high winds exists. Talk to your family members about your evacuation plan…Walk around your home and take a quick inventory of the things you would take if you only had minutes to spare. Pay close attention to weather reports.”

“The time to prepare,” said Ventura, “is not when you are being told to evacuate.”