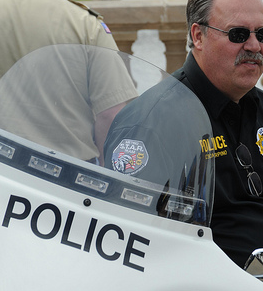 In California, if you get arrested, the police can search your phone so long as it is on you at the time of your arrest. Without a warrant.

Under the argument that a phone is a “container,” for example, a suitcase of marijuana in your car trunk, phones may be searched for text messages, voicemails, call histories and anything else that can be incriminating. If they have “reasonable suspicion” that there may be something in your phone, then they can search it on the spot.

But what the law doesn’t take into account is that cell phones today are no longer mobile telephones, and they are certainly not suitcases of weed; they are sophisticated devices that do much more than simply act as phones. Most people today have smartphones, and on smartphones, Internet histories, photos, GPS and social networking apps can all be accessed. This gives rise to a whole other problem where phones are not just phones, but a storage container of private information that the owner should reasonably expect to be kept private.

The modern cell phone essentially functions as a laptop. It isn’t logical for police to expect that they can follow one set of rules for the warrantless search and seizure of a laptop, but be exempt from those laws for cell phones. There are rules that say that the search of a GPS device is illegal without a warrant; cell phones today have GPS. The owner of the phone should reasonably expect their GPS to remain private, so that should not be searched. There are also restrictions for police searching Internet histories; those are also on cell phone Internet browser apps.

However, there are certainly reasons to lean the other way with phone searches, since they are the high-tech godsends to the beleaguered law enforcement and legal systems when it comes to solving crimes. With cell phone searches and the evidence garnered from them, we get a step closer to resembling the fancy technology seen on CSI.

It is a good idea to give law enforcement the right to check phones in certain situations. For example, in Rhode Island, Michael Patino, accused of killing his girlfriend’s 6-year-old son, walked after getting a guilty verdict from a jury after it was revealed that most of the information that the prosecution had was due to a text message that police found illegally by looking at a cell phone without a warrant. The evidence was there, but due to the improper collection of evidence, the judge is reassessing the verdict and Patino has filed for an appeal.

Circumstances like that make people want to give that power to police at times, because it is literally about catching a killer. This is the kind of thinking that influences the drafting of laws, because people, in Congress especially, crave security over personal freedoms. It becomes about the big picture, not about individuals’ rights to privacy.

However, this kind of thinking is already on a backwards track. It is by taking away people’s individual rights that we begin to label the innocent guilty, and declare that it is “guilty until proven innocent,” rather than the other way around. If all it takes to strip away rights is to be declared a criminal without any legal procedures, then your rights are meaningless. Search warrants exist to bridge the gap between suspicion and proven guilt. Warrants exist to protect people; we would be in a police state without them.

Searching cell phones with warrants is something that is not standardized across the country, with some lawyers arguing that text messages are not technically protected under the fourth amendment because there should not be an expectation of privacy when sending messages to other people. But there is always the chance that you can get caught for something, and the police check your phone and find messages that you never actually sent. Text messages are not something that can be proven that you yourself sent, rather than someone else using your phone.

While it is true that if police see your phone and on the screen there is a text message displayed that they can technically argue it is in plain sight, there are ways to prevent that. People pay for their phones, and can put passwords on them; there is no expectation that anybody other than the owner of that phone will be using it. There is a reason that people protect their phones, and it should never be thought that cell phones are devices that are public in any way. Smart phones can be secure, and when they are, they are not in plain sight. To search a phone without a warrant is a violation of individual rights to privacy.

Law enforcement officers are human beings too, filled with their own prejudices and flaws. They are not above anybody else, and giving them unchecked power to look at phones without warrants would be the first step down a slippery slope for individual rights.