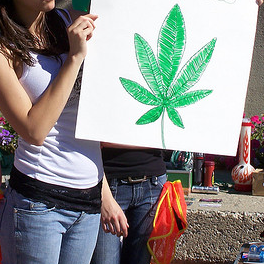 And so it begins. On Election Day, Colorado and Washington became the first states to legalize the recreational use of marijuana, making it legal at the state level to own up to an ounce and dismissing all pending possession cases of less than an ounce. Despite still being illegal at the federal level, it appears that this development could be the catalyst for nationwide legalization.

This situation needs no further establishment; it’s time to analyze whether this is a good thing or not.

Before I launch into my analysis, allow me to add this disclaimer: the views I express here do not, in any way, reflect my own personal habits, or those of the TBL management. This is just the opinion of one humble writer, and either supporting or attacking the legalization movement should not be a basis for making judgments about someone’s behaviors. I have personally seen far too many people offended in conversations regarding this topic. Marijuana legalization isn’t just about stoners getting their way; it’s an important social issue and should be treated as such.

Since my thoughts will have to be a bit truncated here, I’ll begin by removing any surprise from my argument; I believe that marijuana legalization is a very good thing. I will mainly tackle one of the more frequently debated aspects of marijuana, and that is its effect on health. Detractors of marijuana legalization will point out reported negative impacts on short-term memory, respiratory issues stemming from the inhalation of smoke and the possibility of impaired mental function on the long term along with the possibility of addiction.

While there is evidence to support that smoking impairs short-term memory, it has little to no long-term effects on cognitive ability, according to a study published in the Canadian Medical Association Journal. Let me be clear: weed has not been proven to have no negative health impact whatsoever. There simply exists the fact that most research has been inconclusive. For example, a study conducted by the U.S. government measuring marijuana exposure and pulmonary function over the course of 20 years found that moderate use does not visibly impair pulmonary function, which is often believed to be an effect of marijuana use. While this situation does not mean marijuana is necessarily good for you, it helps to negate the accusations levied against it. Even the issue of the inhalants in marijuana smoke can be bypassed to a large degree by devices like vaporizers, as found by another study published in the Journal of Pharmaceutical Sciences.

What does suggest that weed can be beneficial to a person’s health, though, are studies like those published in the Cancer Prevention Research Journal that have shown how moderate marijuana use has been linked to lowered rates of neck and head cancer. In addition, marijuana is known to help stave off depression and other more serious cognitive disorders, according to a study published in Psychiatry Research, and known to aid medical patients like those going through cancer battles in pain reduction and increasing appetites, as reported by the National Cancer Institute. While smoking weed is certainly not the best thing for someone’s health, the fact that it has legitimate medical uses that individuals could be missing out on is a terrible thing. And even though medical and recreational legalization are two different animals at this point, recreational legalization is still important in removing the stigmas associated with marijuana and opening the door for other states to begin legalization efforts.

Legalizing marijuana has effects on society well outside of the realm of health. For example, the possible economic benefits are quite notable. Besides the obvious idea of taxing weed in the same way alcohol is taxed, legalizing recreational marijuana can save the states and federal governments significant amounts of time and capital by reducing the costs of enforcing marijuana laws and prosecuting individuals whose only offenses are minor possessions. In fact, a study by researcher Jon Gettman entitled “Marijuana Production in the United States” valued U.S. cannabis production at over $30 billion, and California has already shown how much money can be saved by reducing incarceration rates, with hundreds of millions saved since the introduction of Proposition 36 in 2000, as shown by the 2006 University of California Los Angeles study “Evaluation of the Substance Abuse and Crime Prevention Act.” Not only could legalization open these channels of revenue, but it can also serve to take large amounts of money from the illegal drug trade that, according to the DEA’s National Drug Threat Assessment, has been shown to benefit the trade. Incidentally, the illegal drug trade has been accredited as the “gateway” that leads to the use of harder drugs rather than marijuana itself as a “gateway drug,” according to arguments from organizations like the Marijuana Policy Project.

Even ignoring some documented health benefits, incongruities in studies regarding its negative effects, the possible economic gains and evidence from other countries like Portugal that decriminalization can actually lead to reduced drug use rates, there is another big issue on display. Individual support for legalization has been increasing steadily. Since last year, polls have shown that support for legalization has now become the majority opinion in the American public. Timothy Stenovec of The Huffington Post reported that on Election Day in Colorado, support for weed was higher than support for Obama. And at the end of the day, shouldn’t the actions of our government reflect the beliefs of the people?

Marijuana legalization is a delicate, controversial issue and should be treated as such. I have attempted to be as factual as possible in my analysis, and I hope it has been evident. This is not a situation to take lightly; it is every bit as significant as Prohibition was. However, it appears to me that the evidence is in favor of legalization, and that is the stance that I take.