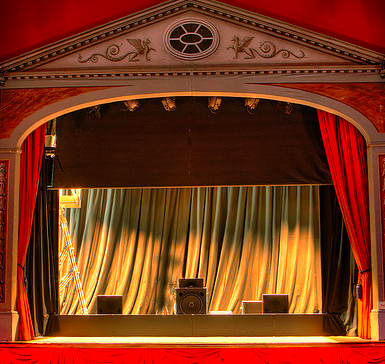 Shakespeare’s character Hamlet once declared, “Frailty, thy name is woman.” Globe Theatre’s performance of the eponymous play on Nov. 9 in University of California Santa Barbara’s Campbell Hall raises the question of whether their performance is, instead, the true name of frailty.

While Michael Benz gave an emotional and exquisitely turbulent performance as the title character, less-than-impressive performances by other actors detracted from the caliber of the play, and peculiar song and dance numbers viciously distracted from the dramatic nature of the play and overall ruined what could have otherwise been a stirring and gripping performance.

The play started as a lively eye-opener that gripped the audience, beginning and ending with similar rounds of the cast dancing to drums and tambourines. However, with a theatre hypnotized into silence by Benz’s death as Hamlet, the sudden and inexplicable dancing that immediately followed shattered the illusion and harshly detracted from the solemn statement on madness and obsession the play aims to represent.

This is not to say Globe Theatre didn’t present an entertaining and enthralling rendition of the classic Shakespeare play. They gave a truly honest performance, which highlighted the tormented and conflicted mind of Hamlet. With Benz undeniably grasping the majority of the audience’s attention, however, the other actors appeared to fall short or to simply not act in accordance with their characters. Carlyss Peer’s performance as Ophelia fell particularly flat, lacking a great deal of emotional clout and depth up until Ophelia’s descent into insanity, which, though sad to watch, held little of the heart-breaking sentiment associated with her lunacy and subsequent death.

Miranda Foster and Dickon Tyrrell served as the Player Queen and King, respectively, and while their performances were admirable, they were nothing astounding or worthy of extravagant praise. Foster seemed uneasy demanding respect of the Queen, whom she portrayed as weak and lacking strength.

Tyrrell multitasked as both the Player King and the Ghost of King Hamlet, an intelligent decision considering the small size of the cast, but his acting choices left much to be desired. The Player King appeared cunning and devious in some scenes, warm and consoling the next; while these are key elements to the deceptive nature of his character, Tyrrell presented these changes unconvincingly, leaving the King as more of a trifle annoyance than the evil villain he is supposed to be.

The lack of emotional depth and dramatic character interactions may not be the fault of the actors and actresses. Artistic Director Dominic Dromgoole planned on trimming down the play—as he states in an Oct. 6 article by The Boston Globe, he wanted to remove “all of the pomp and the seriousness and the rather excessive faux gravity that it usually carries around beside it.” While I commend his attempt to revamp the classic play to add his own spin to it, his rendition of “Hamlet” seemed more like a decision to take the easy route rather than a full effort to breathe new life into the play. By adding lighthearted dancing and songs and downplaying the more serious elements, Dromgoole added a childlike element to a grown-up play.

Overall, the performance of the play did not live up to its dramatic and thought-provoking predecessors. Rather than leaving the audience contemplating the potential for insanity and fixation humans possess, it felt like the audience was left in a comparably upbeat mood. I exited Campbell Hall feeling that Globe Theatre’s production of “Hamlet” was rushed, lacking depth and the chance for the actors, besides Benz, to demonstrate their abilities. To quote Hamlet, “Let me be cruel, not unnatural.” Unfortunately, this performance was both.