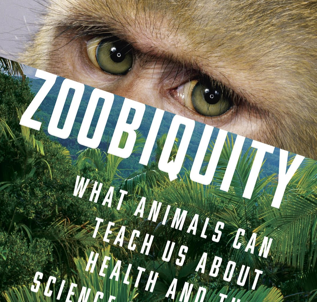 Medical conditions that physicians have been agonizing over for years may have cures, treatments and preventions hidden in plain sight at veterinary offices. Both mental and physical illnesses found in humans such as Obsessive Compulsive Disorder (OCD), chlamydia and cancer have been identified and treated by veterinarians in their animal patients. The solutions that vets have found may provide valuable insight for understanding and treating human patients.

This species-spanning approach to medicine is called “zoobiquity,” and it is the product of the collaboration between two University of California Los Angeles doctors, Dr. Barbara Horowitz and Kathryn Bowers. The two have co-written a book titled “Zoobiquity: What Animals Can Teach Us About Health and the Science of Healing.” On Tuesday, Nov. 13, the two gave an engaging lecture on their theory at Campbell Hall. Their stories about animals with OCD, sexually transmitted diseases, drinking problems and cancer were received by an enthusiastic crowd with laughs and gasps.

An example the pair discussed in detail was the experience of adolescence in male sea otters. This is the only demographic in the otter population that will visit “The Triangle of Death,” an area around Monterey avoided by all sea creatures that don’t want to be dinner. Horowitz and Bowers find this indicative of common evolutionary roots in the angst and daredevilry that comes with adolescence. The transition from being cared for by parents in youth to the independence of adulthood is a shared experience with animals.

Maybe this will sound familiar—when adolescent Zebra Finches tire of fending for themselves, they sometimes fly back to their nest and attempt to mooch food off their parents. This is eerily similar to the typical Isla Vista resident’s weekend trip home.

Alex Zucker, a recent graduate with a degree in Biology, was at first taken aback by the notion.

“I didn’t buy it when they said there were obese dragonflies, it really sounded like bullsh*t,” said Zucker. “‘Swimming the Triangle of Death’ is like the otter version of ghost riding.”

Dr. Horowitz and Bowers have been researching, writing, lecturing and organizing zoobiquity conferences. Their slogan is to promote “a conversation between veterinarians and human physicians caring for the same diseases in different species.” Their conferences simply bring together vets and doctors in the same room for seminars such as “OCD in a Polar Bear and a Novelist,” or “Syncope in a Thoroughbred Horse and a High School Athlete.”

When discussing the reluctance of human medical professionals to accept a cross-species approach, Dr. Horowitz said it is the “greater mistake to not see and understand the mechanisms that tie us together.”

Finding underlying evolutionary causes to modern day medical problems such as obesity and depression can de-stigmatize these conditions. In the “Jews, Jaguars and Jurassic Cancer” section of the book, Dr. Horowitz describes consoling cancer patients going through the “what did I do?” feeling with evidence that cancer is an inherent risk of life. Cancer has been found in dinosaurs, insects and dolphins—wherever cell division is involved cancer can be found.

Interdisciplinary work between the animal and human medical fields is yielding results and demystifying diseases we view as spontaneous. When Dr. Horowitz and Bowers looked at self-mutilation in veterinary cases, they found strategies for prevention and treatment that have yet to be integrated into human patient care. Zoobiquity, along with the continuing work of Dr. Horowitz and Bowers, promises to bring together academic disciplines and professional fields in unearthing our next medical breakthroughs.