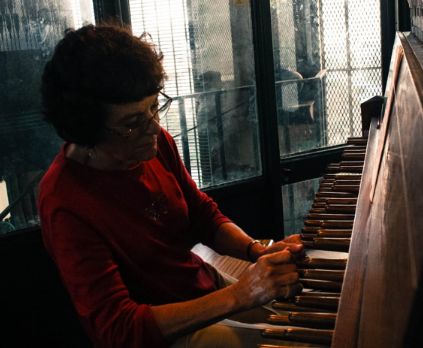 Photo by Deanna B. Kim

Professor Margo Halsted, Associate Adjunct Professor of Music at University of California Santa Barbara and carillonist, performs a variety of songs such as “Michelle” by John Lennon and Paul McCartney and “Hedwig’s Theme” from Harry Potter with the Storke Tower bells.

The official definition is a musical instrument consisting of at least 23 cup shaped bells arranged in chromatic series and played from a keyboard that allows variation of touch. Our carillon at UCSB is one of the finest in the country. It has wonderful bells, good listening spaces, and a spectacular view from the tower.

I was an organist. I majored in music at Stanford and there was a carillon there. I could hear it playing automatically—the same song at noon and the same song at 5 every day. From the observation deck I could see the bells, but couldn’t see how they were played. When I went back there for graduate work Stanford had hired an engineering professor who also played the carillon. He invited me up in the tower once and then he couldn’t get rid of me. I knew when he went up [to play the carillon] so I waited by the door and said, “You have to teach me to play,” and he said, “I can’t. There’s no practice keyboard.” He put some wooden sticks under the keys, so they wouldn’t sound, and I pretended to play. Little by little he taught me, and in about two months, I was playing pretty well.

I had a European tour last summer, which was really fun. I went to Belgium and France and played nine concerts. Bruges, Belgium was my favorite place to perform. It has an unusually shaped tower and is located right on the market place. I was asked to play for the market day there, and there were probably 3,000 people in two different markets who heard me play from above while they shopped below. It was exciting.

I was the acting carillonist at Stanford when the professor carillonist went away for a year. I flew up from Los Angeles whenever they needed someone, about every two weeks. The UC Riverside tower opened in 1974 and I studied there. After passing the rather difficult playing exam of the National Carillon Guild I went on to earn a diploma from the Netherlands Carillon School. The UCR carillonist left and I had that position for about ten years. In 1987 there was a nation-wide search for a carillonist at the University of Michigan, which has a very good music school. So I went off to Michigan and froze to death (Halsted chuckles). I retired from Michigan with emeritus status and I have been at UCSB for four years. If one has a good piano background, that person can play the carillon easily. Organists learn to play even faster because they are already used to playing pedal keyboards with their feet. My students usually can play simple pieces within a week.

I’m old fashioned. I mostly listen to classical music on the radio but I do like the Foo Fighters. Rami Jaffe, the keyboardist for the Foo Fighters, was up here [at Storke Tower] last Earth Day. We had happened to have a recital that day and someone brought him up, so I asked, “Would you like to play?” and he did. He said, “This sounds a little strange.” I said, “Good. You have a very good ear. The bells have a different overtone series than any other musical instrument.” You have to have a very good ear to catch that, especially just from a few notes.