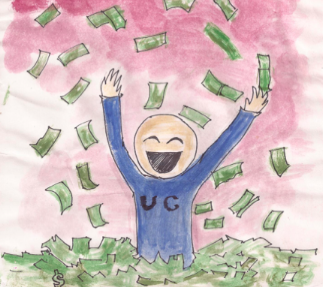 “The Campaign for The University of California, Santa Barbara is a fundraising effort to rally our campus and constituents to raise private support in order to address the priority funding needs on campus. The Campaign is led by The UC Santa Barbara Foundation, in collaboration with the Office of Development and the UCSB Alumni Association, under the leadership of the Chancellor,” said Beverly Colgate, who is the Associate Vice Chancellor of Development and the Executive Director of the UC Santa Barbara Foundation.

The Campaign for the University of California, Santa Barbara was started in 2000 as a response to the uncertainties of public support. The goal of the campaign is to raise $1 billion, and they have already raised $745 million thus far through the generous donations of alumni, faculty, staff and parents.

“The Campaign for The University of California, Santa Barbara will help to ensure that we maintain excellence in our teaching and research, opportunity for all qualified students and innovation in all of our efforts,” Colgate said. “These are expressed in the form of support for students, such as scholarships and fellowships; program and research support across all disciplines of the University, including faculty recruitment and start-up dollars and postdoc support; endowed professorships, to attract and support the finest faculty, and capital dollars to provide the teaching and research space needed for a nationally and internationally renowned institution.”

Fourth-year communication major Monica Guinn did not expect UCSB to attract so many donations.

“I’m surprised to hear about this because I feel like where in such a bad state economically and so I’m surprised that there are people donating that much money,” Guinn said.

Among these donors is 1966 UCSB alum and Oracle Chairman, Jeff Henley. Jeff Henley and his wife Judy, an honorary alum since 2009, donated 50 million dollars to the campaign last spring. This marks the largest donation ever given to the University of California, Santa Barbara by far. The gift was given specifically to UCSB’s Institute for Energy Efficiency and our College of Engineering.

“That’s actually a really big contribution because that’s pretty much directly 5 percent of the Campaign for UC Santa Barbara’s goal of a billion dollars,” Yu said. “That $50 million donation will help a lot in research for any use that the school would be using it for. It’s pretty generous. Anything towards improving the resources and helping the students in any way is a good thing.”

The money from The Campaign goes to both research and financial aid.

“The Campaign has raised over $55M in designated support for students that directly assists students and is earmarked for either scholarships, fellowships, financial aid, financial awards, or internships,” said Colgate. “Our goal is to raise $15M annually to continue this support structure. Support for financial aid to students is one of our top priorities and remains one of the most popular designations for giving.”

“I think it’s very noble that people are opening their wallets for education,” said Natalie Cassvan, a third year biology major. “It’s a very noble pursuit and it’s giving more people the opportunity to get an education. I came all the way from Florida to have a UC education and I’m so happy to be here and to know that the funding is increasing is awesome.”

The Campaign for The University of California, Santa Barbara is the largest fundraiser ever attempted here at UCSB and is making significant strides in its fundraising efforts.

“They [students] can make this same difference after graduation, as alumni, by giving back to their alma mater. This is call creating a ‘culture of giving,’ a culture that will be required to sustain funding for the University in the future as state funding continues to diminish. We hope our students understand this as alumni and continue the culture,” Colgate said.

You can follow the progress of The Campaign for The University of California, Santa Barbara at http://www.ia.ucsb.edu/campaign/