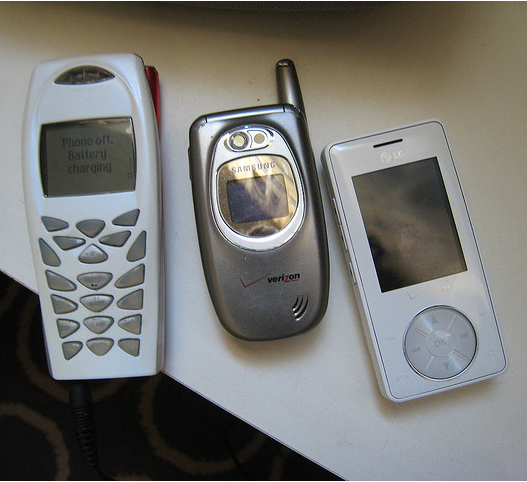 I was in the eighth grade when I got my first cell phone. My eyes had been green with envy since the sixth grade, all because my best friend had her very own flip phone. But my time came, and I was graced with a beautiful, albeit girly pink Razr phone from Verizon. I loved it.

By the time I was a freshman in high school, people already had phones that could connect to the Internet, such as T-Mobile’s Sidekick and a few Verizon phones that had touch screens and could play music. I still had my lovely pink Razr. Very cool, right?

Needless to say, the evolution of phones exploded in a matter of years, and has reached what I might say is the climax of technological innovations in terms of communication and navigation. The iPhone and Samsung’s Galaxy are all the rage nowadays, and I can’t blame people for wanting what’s hot.

But is it too much? They say only love will kill you, and aside from my intimate relationships—or lack thereof—I think smart phones may bring just as much bad as good into the 21st century.

To begin with, the amount of text messaging people—especially young adults—engage in is ominous. I’ll be sitting in lecture while the person next to me has their face glued to their iPhone, group messaging their friends about what happened last night. What happened to genuine conversations, hanging out with people in person, rather than asking how they are through a message?

I still have what might be called a “stupid phone,” one that doesn’t connect to the Internet or have cool apps. Trust me, if I had a smart phone, I would be on Tumblr and Reddit more than I already am.

The truth is, I like my stupid phone. It serves a basic function: to call people when I need to. Way back when I was a pre-teen, my parents gave it to me so that they could always reach me, in case anything were to happen. And while my hormonal pubescent self probably put them through hell, I now admire the simplicity of my parents’ reasoning.

Why would I want to text, call or face time someone—who I’m close enough with to have their number—if I can hang out with them? Smart phones give people a way to be “close” to their friends, but have also made people weary of the idea of connecting with someone in person. For lack of a better word, they allow people to be close, but not too close for comfort.

I don’t burn the midnight oil: I do have a Facebook, I use Tumblr and Skype. But I refuse to exchange the authentic experience of hanging out with someone in person, be it over coffee or just watching trash television in their apartment, for a relationship over impersonal texts.

Communication through phones, especially texting, robs every person of the most human thing: relationships.

What really takes away from our human abilities though, is the virtual constant connection to the Internet. If you have a 4G phone or one that gives you wireless Internet wherever you go, be weary. The Internet is a massive virtual world that you can lose yourself in—and having it at your disposal, all day everyday, can be dangerous.

I see people on their iPhones on Facebook all the time, spending hours on Pinterest and tweeting everything they are learning while in a lecture (trust me, I’ve seen this). This access to the web creates, or feeds into the restlessness we humans have: a near addiction to be doing something all the time.

Now try taking all of that freedom and power away. People will become bored, even more restless and maybe a little bit paranoid. Smart phones have become a crutch for people. And when you take that away, people have nothing to aimlessly scroll through while they’re waiting for something.

Don’t tell me you don’t reach for your phone first thing in the morning.

I suppose you could make the argument that each generation has had their own kind of smartphone—the television, walkie-talkies and without a doubt video games. I do not deny or oppose the groundbreaking developments in technology, but we are dangerously close to the edge of losing our human qualities that define us. Henry David Thoreau saw this coming a long time ago when he said “men have become tools of their tools,” in the 19th century.

Bachelor’s Degrees Are The New High School Diplomas — Only We...