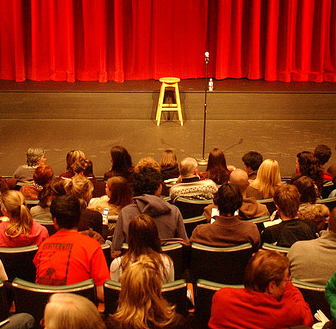 If you’ve ever been in an argument—even a playful one—with some of your friends, you’ve undoubtedly had the moment, hours later, when you think of the perfect response to a comment that, at the time, left you mumbling a “Yo’ Mama” joke. The French, in their infinite need for elegant words to describe everything, call this “esprit d’escalier.” Directly translated, it means “staircase wit,” because it’s the comeback you think of while you’re on your way down the stairs and out. For those suffering from espirit d’escalier, I recommend a healthy dose of “Whose Live Anyway?,” the entirely improvised comedy show featuring regulars from the 90s television classic “Whose Line Is It Anyway?” The event was part of University of California Santa Barbara’s Arts & Lectures Event series.

The group, composed of Ryan Stiles, Greg Proops, Jeff Davis and Joel Murray, performed to a packed concert hall at the Granada Theatre Oct.16 and proved that though 14 years have passed since the show last aired in 1998, they haven’t lost their flair for quick comebacks. For those unfamiliar with the show or the live performance, Stiles, Proops, Davis and Murray perform skits, sing songs and play games all with audience input and suggestion.

“Audience participation is key to the show,” Bob Derkach, musical director and keyboardist, said in the program, “so bring your suggestions and you might be asked to join the cast onstage.”

The audience input can lead, and often does lead, to hilarious and odd situations. One game transitioned from vacuuming to fighting with lightsabers to a conclusion involving the performers milking cows. Another game required a setting suggestion from audience and the loudest voice declared the Spanish Inquisition. The performers took the suggestion in stride, one saying how that was unexpected.

“No one expects the Spanish Inquisition,” Davis stated.

The improvised aspect of the show does run its risks. Davis found himself on the ground during one game and another brought the show close to getting a PG-13 rating for sexual content. Adding to the challenges, the audience didn’t always speak clearly and Proops took the opportunity to ensure they would speak up through the rest of the show.

“I couldn’t understand you,” said Proops after one particularly incoherent yell. “You have to use vowels and consonants.”

The performers are no strangers to the Santa Barbara area, particularly Stiles and Proops who live in Los Angeles, and they made sure to include local knowledge in their performance. After singing a song to a woman from Solvang whose gift shop includes many items from China, the relationship between Solvang and China became a running joke throughout the show.

“Solvang is Chinese for ‘we’re not Dutch,’” joked Stiles.

With the fervor surrounding elections and the presidential debate that occurred the same night, Whose Live? couldn’t resist commenting on the political climate. Stiles and Davis played a game involving them randomly reading audience-created sentences from pieces of paper and politics quickly entered the discussion. Stiles, reading from a slip of paper, asked Davis why he, as the governor, thought he “could be President anyway.” Davis, to his credit, didn’t shy away from taking a position.

Even when handling serious and important topics, the show never drifted far from its comedic roots and both Whose Live? and the audience had an unsurprisingly hilarious night.

“We had fun,” said Stiles after the performance. “It was a great show.”