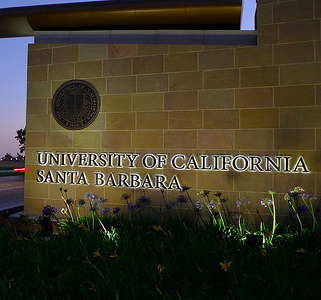 It was a hodgepodge of dazzlingly disparate topics, ranging from home-cooked food and zombies to poo and the essence of true love. But for two hours at Isla Vista’s Biko Garage on Oct. 18, it all came together in a magical confluence of raw honesty and vulnerability during “An Evening of Spoken Word with Sean Hill,” the first of a series of poetry open mic events organized by University California Santa Barbara’s Multicultural Center.

Los Angeles-based actor and spoken word artist Hill was in town to headline the event, and he did not fail to light up the stage with his gregarious personality that complemented his signature afro hairstyle.

The setting was appropriately cozy and intimate for a night of sharing that promised to be a “safe space for edutainment,” and the sense of heady anticipation that filled the crowded room right before the readings began was encouraged by the presence of a DJ and host who later also helped to seamlessly weave the different acts together.

Hill’s rhythmic ruminations on life, love and other assorted miscellany were light-hearted and accompanied by self-deprecating jokes and up-tempo beat boxing. However, they still struck a deep chord with audience members who laughed and snapped their fingers along in empathy when he touched on a childhood anecdote about being frowned upon for exhibiting his emotional side, complete with a hilariously spot-on reenactment of the precise sentiment he experienced at that point.

What I particularly appreciated about this first open mic event was its emphasis on sharing and dialogue; Sean Hill interspersed his pieces with other equally outstanding performances by audience members, and many of these honest confessions inspired short discussions or commentary during the transitions as well. The sign-up list for performances was initially short, but began to fill up fast throughout the night, buoyed by the supportive and encouraging environment.

Also helpful were Sean Hill’s tips for first-timers who have nerves about speaking or performing in front of an audience.

“Being nervous is probably the most selfish thing you could ever do for the audience,” he said. “You have so much inside you that you can give to them.”

“For one night, I felt that I was part of a safe space of artists and thinkers, people who create and inspire,” said Kristin Minasian, a fourth-year English major who shared her written work for the first time at the event. “Sharing my work was liberating. It felt like people were understanding and encouraging something that has been a part of me for so long.”

At the end of the night, Sean Hill summed the event up as a “safe haven where people can speak their minds, an oasis.”

I couldn’t agree more, for as much as there was such great diversity in the opinions shared that evening, and among the people who turned up that night, we were united in our vulnerabilities, in our understanding and baring of our inner worlds.