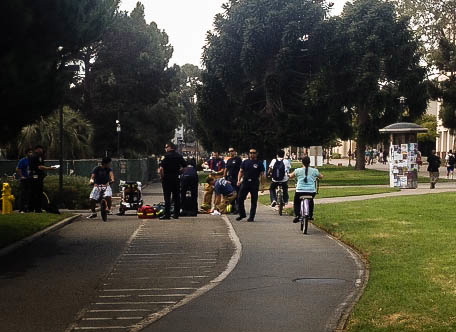 When I started packing for college, I hesitated the longest over one thing. Holding my trusty bike helmet in my hands, I deliberated whether or not it should join me at University of California Santa Barbara, where bicycling was sure to be a part of my daily life. The answer was obvious. It was the only thing between my skull (which, as I’ve learned in my first week of Introduction to Psychology, is the main protector of my brain, yet not as hard as I thought it was) and the concrete. Why is it so difficult to put it on, click the straps together, and proceed comfortably?

“I would think that people here would know how to use the bike lanes, but there are a surprising amount who don’t. I’m not scared to ride my unicycle around, but I know people who won’t bike right now just because of all the freshmen crashes,” first-year Jackson Hranek said.

UCSB is an ideal location for bicycling for a number of reasons: it is flat, everything is relatively close together, and routes and paths are clear and maintained—not to mention the view. However, these become hard to appreciate when the rider has to focus on not crashing or face-planting. Aside from the lack of helmets, the very behavior of riders around campus puts everyone in danger, shown by the numerous crashes and even greater number of close calls every day.

“Since bikes replace cars, there’s just as many rules, but I feel that I don’t know them nor do the other students here,” fourth-year Brittany Daley said.

It is completely normal to witness these hazards at any time in the day, especially in “rush hours,” the peak times of traveling to and from class at the end of mid-day hours. On crowded paths no more than a few feet in width, riders move dangerously fast in order to reach their destination on time, avoid others on the path, get past the growing cluster of pedestrians at the edge of the path or all of the above.  As a freshman, I can personally point out the harassment you are sure to receive if you slow down even slightly on a bike path, even if it is not your fault.

It is easy to assume that the answer is the same as the one that explains most poor judgment on a large scale—people go with the flow. However, this “when in Rome” attitude affects reckless and innocent bike riders alike. In fact, the National Highway Safety Administration reports that 70 percent of biking fatalities are due to head injury. That helmet should not look too bad now—according to the Centers for Disease Control and Prevention, a helmet (properly worn) helps reduce this risk of head injury up to 85 percent. On another note, alcohol-impaired driving or riding was involved in over 40 percent of the accidents that included fatalities in 2009 (Edgar Snyder & Associates).

“It’s really bad when people are drunk and bike—it’s better than driving but still dangerous… I’ve had friends who have crashed into cars and messed up their faces,” Daley said.

Riding a bike at UCSB is like driving anywhere else (yes, you can get a BUI!). Stop signs, roundabouts and designated-direction lanes are there to help students get to where they need to go as safely as possible, as long as the rules of the road are followed. That being said, there are also probably a few things that people can do to avoid (justifiably) angering others. Never take up a whole lane; leaving room to pass ensures that the other person won’t have to resort to dangerous maneuvers. Simple guidelines like the ones listed here can help make the campus both bike-friendly and bike-savvy.

Incidentally, I did bring my helmet and hung it by the bed. It has since been shoved into upper storage.