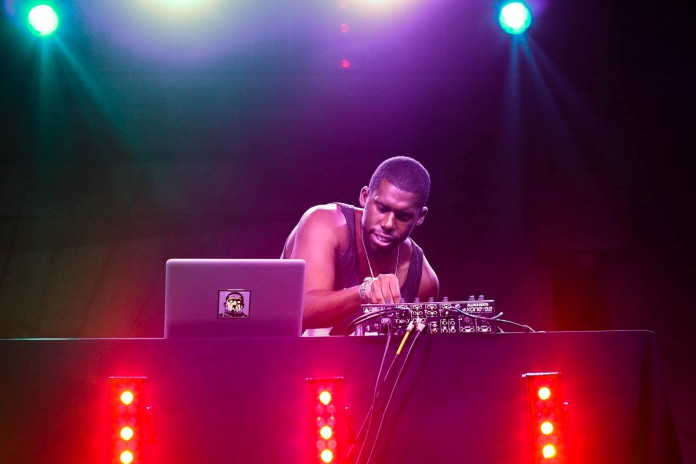 Reminiscing on Flying Lotus’ Coachella set at the Gobi tent earlier this year and on last weekend when he opened for Animal Collective at the Hollywood Bowl, I assumed that the third time had to be the charm. Right? Right.

This time, in no better place than University of California Santa Barbara’s Storke Plaza on Sept. 29, Los Angeles beat producer Flying Lotus—formally known as Steven Ellison—pushed forth a set of deconstructed, intensive bass music at UCSB’s annual Welcome Back Concert, hosted by the Associated Students Program Board.

The plaza began loading up at 8 p.m., and packs of enthusiastic partiers rushed towards the stage as Alex Lin, the opening DJ, had his chance to fill the plaza with vibrant sound. I thought that his music was nothing I hadn’t already heard on the streets of IV, but other attendees appeared to enjoy his dubstep grind.

Once the clock struck 10, the audience was warmly greeted by FlyLo himself, who was donning a black LA tank and a smile. He commanded a crowd of several thousand students for the next hour, casting his thick fog of sonic harmony and electronic intoxication into the eager crowd. Though his jazz-derived electronic is particular and psychedelic, Lotus performed with such palpable joy and skill that he made working with a laptop look like a ritual rite; he was a shaman, and the audience was under his trance.

From the get-go, FlyLo demonstrated a magnetic energy; he bounced before his computer and tabletop mixer and interface, creating jaw-dropping remixes and enjoyable psychedelic jams. He also showed no hesitation in throwing aural curveballs at the audience, such as shattering the plaza with his massive beats before abruptly shifting gears and dropping down to half-time unexpectedly. He appeared to revel in slowly pumping up the crowd before bringing them back down with more mellow beats.

What astounded me most, initially, was just how captivating and absorbing Flying Lotus’ music was to an outdoor audience. FlyLo had a little help from bassist and recording partner Thundercat, and together they brought the energy up another level.

To the delight of some and the chagrin of others, FlyLo also demonstrated a lot of remixes and covers. He lent his style to Frank Ocean’s “Thinking Bout You,” and also blended Schoolboy Q’s “Hands on The Wheel” and Kendrick Lamar’s “Swimming Pools (Drank)” together in a musical marriage. He also dropped Radiohead’s “Idioteque” and Waka Flocka Flame’s “Hard In The Paint;” the latter song automatically prompted enthusiastic fans to sing along.

“My head is just lost in this. It’s like I stepped into another dimension, and I currently don’t mind my tuition going to purposes such as this,” said second-year political science major Andrea Oh in regard to FlyLo’s set.

Toward the end of his set, FlyLo asked for personal requests from individuals in the crowd; he appeased one fan by playing a short tribute to J Dilla. He also played a few cuts from tracks off his new album Until the Quiet Comes, which dropped Oct. 2. The songs sounded slightly heavier and rhythm-oriented than his older music, which may or may not appeal to die-hard fans. To finish off the night, he made his exit after playing a gratifying encore and asking where he could find whiskey and parties, promising to celebrate with students on Del Playa Drive.

“Oh my goodness, this concert was phenomenal. Just a few seconds into the first track I found myself closing my eyes, leaning back and soaking in all of the different layers of Flying Lotus’ complex sound,” said third-year economics major Henry Kole. “Flying Lotus is a music god. He grips you and doesn’t let you go.”

“Talk about a mind-blowing welcoming, only gets me that much more excited to see what UCSB has in store this year,” said second-year communication major Justine Estrada.

All in all, I believe that it was a welcoming from L.A.’s beat king that was both well-deserved and well-received.