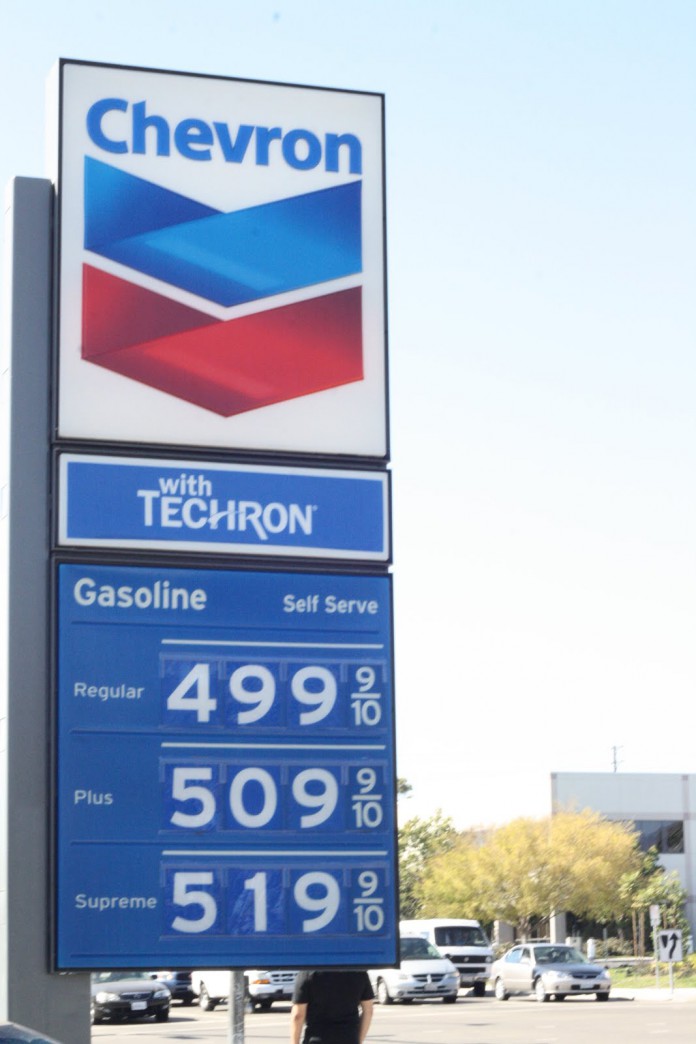 California gas prices hit a record high Saturday, Oct. 6, and continued to climb until Oct. 9, reaching $4.671 per gallon, the highest in the nation. According to The Los Angeles Times Energy Editor Nancy Rivera Brooks, the high gas prices were caused by a series of problems, most recently a power failure at Exxon Mobil’s Torrance refinery.

Although the cost began to fall on Oct. 10, they are still monumentally high, and many people are feeling the burn. University of California Santa Barbara third-year student Hannah Bae commutes almost daily from Los Angeles, where she lives with her fiancé. For the time being, they find it more cost-efficient to live together and for Bae to make the 123-mile-long commute to school four days a week. However, she certainly pays attention at the pump.

“I fill up every two days,” said Bae. “I actually had to choose between paying $4.59 and buying a car wash at Shell, or driving around on a low tank looking for something cheaper. I bought the car wash, but it still came out to $70.”

Third-year David Haynes, who drives about three times a week and goes home to Oakland for holidays, has felt the effects of the high gas prices.

“I just try to do more when I decide to drive, like I do it all at once instead of doing multiple trips like I normally would,” said Haynes.

Haynes has also had to think about his budget when filling up.

“If half my paycheck is going to gas then I can’t do anything fun,” said Haynes. “I definitely don’t want to spend it all on gas…but you still have to get places.” Although he considers having a car extremely convenient, Haynes says that if prices kept going up, at a certain point he would no longer be able to afford it.

On the other hand, first-year Joy Lin, who drives home to Riverside once or twice a month, says that she would probably still drive even if the prices kept rising.

“The [record high] gas prices haven’t affected me yet, but I just filled up the other day and it was pretty pricey,” said Lin.

For UCSB students like Lin who do not drive very often, there are a variety of transportation alternatives outlined on the Transportation Alternatives Program (TAP) website. These alternatives include bicycle, bus, carpool and vanpool programs as well as CarShare by Zipcar and commuting by rail.

However, for students who are unable to find cheaper gas around UCSB, TAP advertises to students that they can stop paying high gas prices if they join the program, which many could find extremely enticing, especially now.

The Chevron station in Goleta, the closest place for UCSB students to buy gas, declined to comment on how the recent spike affected them.

While the four days of record high prices have passed, and analysts predict prices will begin to fall even before the cheaper winter gas is put to use, it is uncertain when prices will return to a reasonable level. Until then, student drivers may have to reconsider how much they really want to pay for transportation.

For more information on transportation alternatives, visit the TAP website at tap.tps.ucsb.edu.