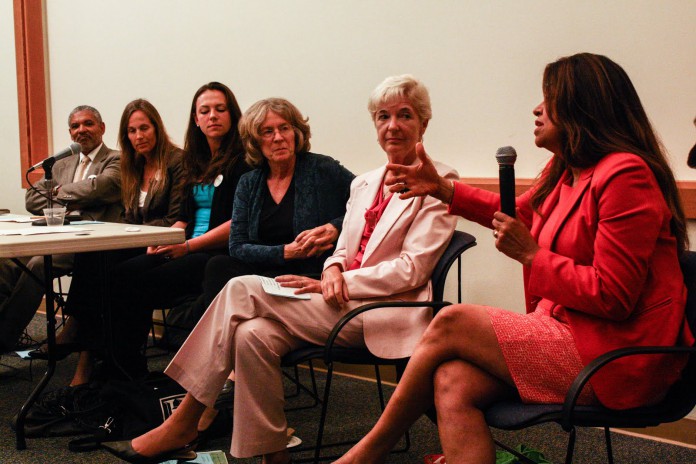 A merry group of men and women gathered in the McCune conference room on Monday, Oct. 15, to kick off University of California Santa Barbara’s two week celebration of Title IX.

Signed by President Nixon, Title IX was added to the Higher Education Act of 1965 in 1972. The act is widely known for expanding opportunities for female athletes at the college level, and it also bans sexual discrimination from any federally funded educational program or activity. Female professors, graduate school applicants and athletes, once small in numbers compared to their male counterparts, became legally protected from discrimination thanks to Title IX.

Anna Everett, professor and Director of Graduate Studies at UCSB, opened the event with a reminder of available temporary tattoos and buttons promoting the Title IX celebrations.

“I think we will have a wonderful opportunity to have a dialogue,” she said, speaking to her diverse audience. Chancellor Yang came to offer opening remarks about the celebration. He discussed the welcomed implementation of Title IX at UCSB and the progress made by women on campus because of the law.

“Your achievements inspire us and make us proud,” he said to the female athletes in the room, “We also recognize we have a long way to go.” Nearly all the speakers acknowledged this same sentiment throughout the evening. Vice Chancellor Gene Lucas also spoke about the celebratory events and effects of Title IX on UCSB.

“I think we’ve been intentional about addressing gender equity issues on campus, but that doesn’t mean we can stop there,” he said, further recognizing there is work to be done for women.

Diane O’Brien, UCSB’s Executive Associate Athletics Director, provided some examples of gender inequity that exists in women’s sports in spite of Title IX. She noted 60 percent of women’s teams’ coaches today are men. Professor of Sociology Melvin Oliver compared the modern opposition of Title IX to affirmative action opposition, being attacked for taking opportunities away from one group and giving them to another. He also noted continued disparities between men and women in the fields of science, technology, engineering and math, and encouraged support for women in those fields.

“If we did it with sports, we can do it with STEM,” said Oliver. However, there is no doubt that women have made tremendous progress in American universities thanks to Title IX and the women who rose above limitations set by sexist expectations in the 1960s and 70s. Our faculty, full of accomplished women who pursued educations in spite of a rigid social structure, reminds us of the work that has already been done. Professor Janis Ingham chose to focus on the issues of her time in college.

“I’m going to tell you where we were not,” she said, after describing herself as “pre-pre-pre-pre-pre Title IX.” Ingham was the first female Ph.D. student in her discipline at the University of Kansas.

“I’m not bragging, it’s embarrassing,” she said. She recalled the condescending attitudes of her male classmates. “I think I got extra credit for having normal intelligence.”

Pat Cohen, professor of history, experienced a similar issue in graduate school in the 70s.

“All women my age have these stories,” said O’Brien on the normalcy of the discrimination women have faced in the past.

However, thanks to Title IX, women in college today are protected against discrimination on the basis of sex. Though women still face challenges in a patriarchal world, they are more equipped than ever to face them. The implementation of Title IX has been invaluable to the progress of women who attend and graduate from American universities.