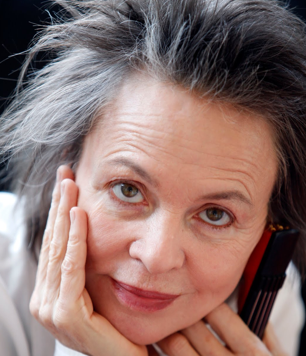 Laurie Anderson’s performances are hard to classify and even harder to forget. Her innovative use of technology and multimedia to tell stories and create transformative experiences has made her a prominent artistic force in the U.S. and abroad.

Anderson’s “Dirtday!” performance on Oct. 23 at University of California Santa Barbara’s Campbell Hall, sponsored by UCSB Arts & Lectures, featured candid musings set to evocative music and an eerie ambience. “Dirtday!” mixes humor with profoundly earnest insights to create a chilling and thought-provoking experience. The performance title derives from a flippant remark Anderson makes in the show. The name “Earth,” Anderson observes, is too formal for our homely planet. She suggests renaming it “Dirt” for a more personal feel, hence Earth Day would transform into Dirt Day.

The performance allowed the audience to follow Anderson on her meanderings though memories, popular culture, politics and the woes and vacillations of everyday existence on planet “Dirt.” Anderson communicated these insights utilizing voice alteration, video screenings and musical interludes played on instruments of her invention. An otherworldly atmosphere was created by dozens of candles burning onstage and superb stage lighting designed by Brian Scott. The audience was transported into a dreamlike state were ideas could almost be perceived viscerally.

Anderson certainly has a unique perspective on planet “Dirt,” having served as NASA’s first and only artist-in-residence. When NASA initially approached Anderson about the residency, she was uncertain of what the position would entail. When she asked for clarification, the scientists in turn asked her what she herself thought it meant and essentially allowed her to create the position. Anderson’s time with NASA helped her “realize that artists and scientists work in similar ways” as they explore the world around them. The experience served as the perfect catalyst for exploring questions relevant to both art and science: “What is science? What is truth? What is beauty?”

The “Dirtday!” performance was not Laurie Anderson’s first visit to Santa Barbara. She performed here two years ago and has close ties with the Theater and Dance Department faculty, who have entreated her to teach at UCSB for years now. Though Anderson has so far declined the offer, she visited the department to share her insights on creativity and how to establish a career as a performing artist.

Anderson emphasized that as young artists, the students should not wait for others to ask them what they wish to do. Rather, initiative combined with a clear vision is key to realizing one’s aspirations. Anderson herself embodies this principle. For instance, she wondered for years what it would be like to play a concert exclusively for dogs, even discussing the concept with musician Yo-Yo Ma backstage once before a show. Finally, in 2010, she asked for and received a chance to perform a concert for dogs at the Sydney Opera House. The experience, Anderson said, was “the most amazing concert I’ve ever, ever gotten to give!”

At the “Dirtday!” performance, Santa Barbara audiences experienced firsthand the unique sense of whimsy and fearless earnestness that Laurie Anderson brings to her artistic pursuits.