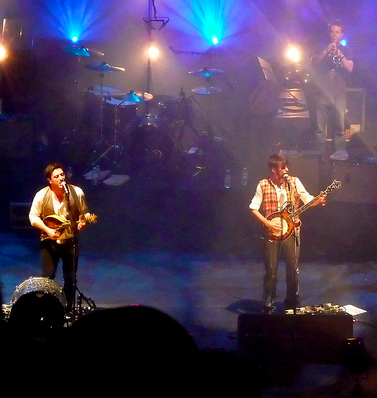 In 2009, the popular music scene was blown up by the folk bombshell that is Mumford & Sons. Their debut album “Sigh No More” rocked fans to the very core with crazy up-tempo banjo play, stand-up basses, towering harmonies, smashing kick drums and Marcus Mumford’s profound growl. Since then, the humble London natives have continuously packed stadiums and brought folk back to the public limelight in a way the world has never seen before. They milked “Sigh No More” for all it was worth, teasing their fans for three years as their followers anxiously anticipated a subsequent work of art. I can confidently say it was well worth the wait.

It’s been three weeks now since Mumford & Sons released their second album, “Babel,” for which they reunited with producer Markus Dravs. If you haven’t bought the album by now, there just might be something wrong with you. “Babel” is a roaring musical masterpiece with more instrumentation, more insight and the same high caliber of remarkable lyrics that we have come to expect from Mumford & Sons.

The album aptly kicks off with a bang through the eponymous song “Babel,” in which Marcus Mumford poetically howls for the enclosing walls around him to come crumbling down. The album retains the powerful essence of “Sigh No More” throughout its duration, but it also introduces new wrinkles of delight. It sticks to the band’s skillful artistic use of breathtaking dynamics, as seen through the loud up-tempo anthem of “I Will Wait” and through the soft, delicate rise of “Lover’s Eyes.”

Many of these songs might sound familiar only because they have been performed live for quite some time now, like “Lover of the Light” and “Below My Feet.” I, for one, will never forget how I was blown away when Marcus Mumford threw down the guitar and pounded away behind the drum set when they played here two springs ago at the Santa Barbara Bowl. But this is also why “Babel” is such a great album; the quality of it is relative to that of a live performance, and your ears probably won’t know the difference.

In a musical industry dominated by glamour pop rhythms and hallow repetitive choruses, it’s hard to find lyrics that are both substantial and aurally delicious. As “Babel” demonstrates, Mumford & Sons have not yet ceased to provide tremendously rich lyrics. They are overwhelmingly satisfying and provide a powerful punch of both struggle and triumph. If “I Will Wait” is the only song that you’ve heard from the album, then you are missing out. Just ask band member and keyboardist Ben Lovett. When asked about the heavily radio-played single, he told an interviewer, “It’s the worst track on the record – we just thought we’d get it out,” and when questioned about the rest of the album replied, “It’s only up from here!” While I enjoy “I Will Wait,” I have to agree with Lovett; it isn’t even close to being my favorite song on the album. That being said, if “I Will Wait” is the worst song on the album, then it just might be the best worst song ever.

Other memorable songs from the album include “Lover of the Light,” “Lover’s Eyes,” “Reminder,” “Not with Haste” and, above all, the song they performed live on Saturday Night Live, “Below My Feet.” Some listeners may prefer the clashing folk force of sound that is prevalent in some songs, others may appreciate the diaphanous lyrical webs woven through others. But then again, that is the beauty of Mumford & Sons. You don’t have to choose, because you always get a blissful helping of both.