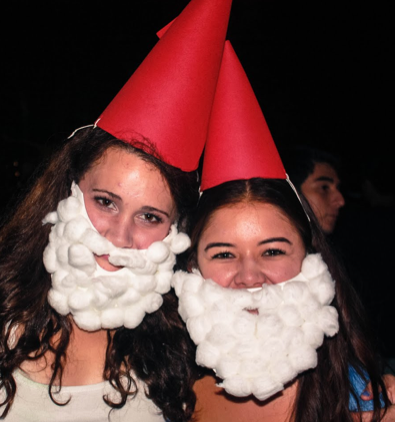 The only thing scarier than zombies and vampires is Halloween weekend in Isla Vista. Seriously, with so many out-of-towners, your phone won’t even have reception. IV becomes…The Dead Zone [insert creepy music here]. And that is only the beginning.

As a student at the University of California Santa Barbara, perhaps many of us take for granted the variety of things that make up the awesomeness of our school—the beach, the nightlife, the scenery and the good-looking people. The truth is, the UCSB-IV culture has appealed to many of us since we were freshmen, and it continues to attract hoards of people, particularly during Halloween time. Why? Because if there was ever any doubt about our reputation as one of the craziest party schools in the nation, Halloween weekend is there to set everyone’s record straight.

Halloween is pretty much the event of the year. It’s an unofficial school holiday that so inconveniently occurs during midterm season, a fact that does not stop people of all walks of life raging together in ridiculous costumes. Del Playa turns into a huge block party/parade of half-naked people on the Thursday, Friday and Saturday nights surrounding Oct. 31. Everyone and their mother dresses up (or down) in their scariest/sexiest costumes to roam around DP with their friends, random people in banana suits and maybe some cops while in a state of brutal intoxication—activities that could be labeled as fun.

And let’s not forget the pictures. You feel giddy when you realize that your camera is full of pictures from last night, which you get to relive all over again. Being able to check out everyone’s costumes in a sea of people is possibly one of the best parts about it. Katy Perry, Wonder Woman, Spiderman, Lady Gaga and Edward Scissorhands (you thought I was going to say Cullen, huh?) flood your Facebook newsfeeds, along with narrations of a night that some do not recall completely (or at all). This full-blown tradition completely belongs to students of UCSB and serves as an indicator of pride, as well as a reminder for jealous students at other schools about our lifestyle, our privilege and our unhindered wild side.

But nothing comes without a price. IV Halloween is well known for all the positive experiences people have had here. However, few people think about all the crime that occurs on the daily. Stabbings, robberies and vandalism occur all too frequently during the Halloween celebrations and terrorize the already dangerous streets of IV. Last year alone, the police reported over 400 arrests and citations, more than 100 students in need of medical assistance and an overwhelming number of burglaries and property damages, according to a staff report from the Santa Ynez Valley News.

We party hard, but people ignore the fact that IV is a town just like any other—prone to assaults and burglaries. The truth is, going out on Halloween weekend is as much as a sacrifice as going on that crash diet to look superb in your suggestive costume. With the addition of out-of-towners, the probability of crime increases; the fact is that people who don’t live here are probably unaware of the laws and the implications of their actions. We expose ourselves to more than an unfortunate hook-up with a seemingly attractive masked guy; in fact, we can be potentially putting ourselves in a risky situation (and no, your mom did not hire me to say that).

However, although IV may involuntarily turn into a town haunted by all this crime and disruption, you cannot deny that there is an eerie, preternatural lure about the most anticipated event of the year that continues to captivate us in a hundred different ways. And after all, surviving Halloween in IV is definitely something you can cross off your bucket list. Next time you’re stuck in a horror movie, perhaps you’ll be able to last longer than the person trapped in the middle of the human centipede.