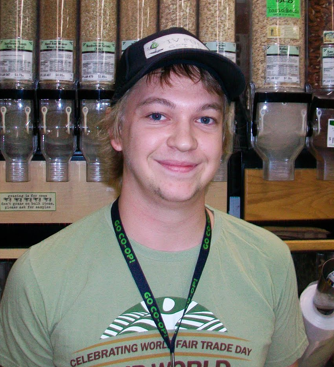 Why did you decide to work at the Co-op?

I shopped here for a while and found out they were hiring. Once I got into it, I discovered the co-op model is a really great thing. It allows everyone who’s involved to have an influence in the place. Now I live in co-op housing as well, so I’ve kind of immersed myself in it.

Why do you think it’s important for a community to have a local cooperative?

The point of the co-op is to be representative of the community. Rather than another store where people are getting sold stuff, here we try to represent our community. It’s an interesting scenario here because we have so many students and there are also the IV permanent residents. We try to walk that line: making things affordable for college students, but still have really good products. We do a lot of stuff beyond being a grocery store. We aren’t trying to make a profit. Our general manager donates to community groups and school groups. That’s our goal here: to foster a good community.

What does the Co-op think about the new, large chain restaurants coming into Isla Vista, which is more known for family owned and operated shops?

We are here to provide an alternative and we are more locally sourced. We’re trying to make people’s lives better, whether it’s by giving people fresh lettuce or by getting people actively involved in the community.

What are some of the benefits of local produce?

There are benefits to people who shop here. There’s also the principle of supporting local business owners. The farmers are always super grateful. Instead of having to pay for lettuce to be shipped halfway across the country and paying for the cost of the lettuce, pesticides that were probably used on it, environmental damage and petroleum needed to transport it, it helps out farmers being local.

What are some of the benefits of being a member of the Co-op?

There’s a financial incentive. We have the quarterly discounts for members. Other than that, being a member entitles you to go to board meetings. You have a voice in it. There’s no weighted membership: everyone who is a member is equal. It’s a community-minded thing.