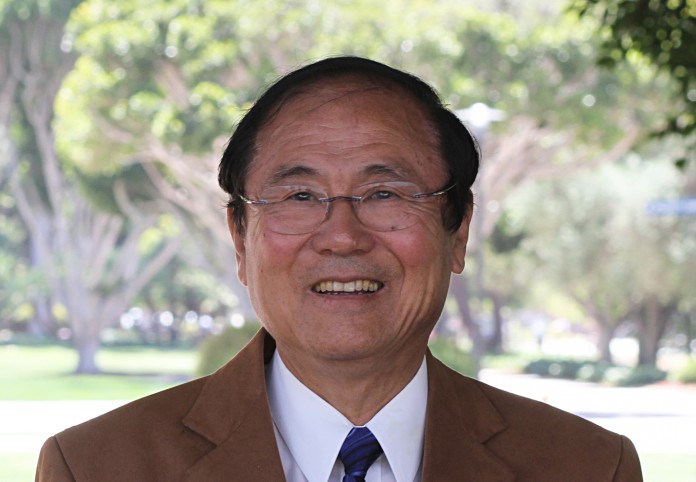 You’re sitting in class. You hear some shuffling and you look up to notice a man wearing a suit sitting in the seat next to you. He’s not the TA and you’ve never seen him in this class before, but he looks somewhat familiar. Suddenly, it hits you. You’ve seen this man before at your freshman convocation and around campus. The random man sitting next to you in your lecture is none other than Chancellor Yang.

You look back at the professor, puzzled. Why on earth is Chancellor Yang sitting in your lecture? Why isn’t he in his office, doing whatever chancellors do? The answer is simple—besides tending to his many administrative duties, Chancellor Yang also devotes much of his time to being active around the campus with his wife, Dilling.

“Dilling and I enjoy attending lectures, seminars, plays, dance recitals, concerts, athletic events and other campus activities throughout the year,” Yang said. “We have purchased a meal card so we can join our students in the dining commons.”

Chancellor Yang and his wife enjoy spending their early mornings, late nights and weekends walking around campus, on the beach and even in Isla Vista, getting to know students, staff and faculty members. They enjoy the vibrance and color of the campus.

“It is such an honor and pleasure to meet so many wonderful people every day who love this university,” Yang said. “That’s one of the reasons why UC Santa Barbara is so special – we are not just a university, we are also a community.”

Despite not having graduated from University of California Santa Barbara, the chancellor is extremely proud to be a part of the UCSB community. He and Dilling were named honorary alumni of UCSB in 2001. Ever since being named chancellor in 1994, Chancellor Yang has spent endless hours working to make UCSB what it is today.

A normal day for Chancellor Yang includes meetings in the morning, phone calls during his lunch hour, speaking at campus events in the afternoon, stopping by a few community events in the evening and then returning to his office at 11 p.m. to respond to emails. In addition to all of this, the chancellor also teaches a 3-unit undergraduate class every year and finds the time to mentor four graduate students.

“Teaching is my first love, and I am always energized and rejuvenated by my undergraduate classes and my work with my graduate students,” Yang said. “I enjoy the opportunity to interact with our students in the classroom and on research projects, in addition to my work as chancellor. After all, our students are the reason we are all here.”

His book on finite element structural analysis is used by many universities and has even been published in Japanese and Chinese editions. In addition to all of this, Chancellor Yang is the current chair of Pacific Rim universities and has served on scientific advisory boards for the Department of Defense, U.S. Air Force, U.S. Navy, NASA and National Science Foundation.

Although he is proud of all of his achievements, Chancellor Yang is even prouder to be the chancellor for UCSB.

“It is a privilege to serve as UC Santa Barbara’s chancellor,” the chancellor said. “We love our interactions with our students, faculty, staff, alumni and supporters—and we are constantly energized and inspired by all the wonderful, creative and innovative work being carried out here.

Since Chancellor Yang took his post at UCSB, the campus has been elected to the Association of American Universities. We are now ranked number 10 among all public universities in the nation by the U.S. News and World Report. The National Research Council ranks nearly a third of our doctoral programs within the top five in the nation, with more than two thirds being ranked within the top 20.

Despite UCSB’s many achievements, the chancellor is still reluctant to take too much credit.

“These achievements are the result of the sustained, collaborative efforts of all of us,” the chancellor said. “These are just a few among many indicators of the strength and vitality of our academic community. Our students are our partners in advancing the reputation and stature of UC Santa Barbara.”

Although Chancellor Yang is extremely busy every day making UCSB better, he made it clear that students should not be afraid to stop and say hello. The chancellor enjoys meeting students and getting to know about you and you experiences at UCSB. If you want to get to know him better, you can also take his class, ME167: Structural Analysis—but register quickly, because the class only holds about 60 students.

Photo Courtesy of the Office of the Chancellor