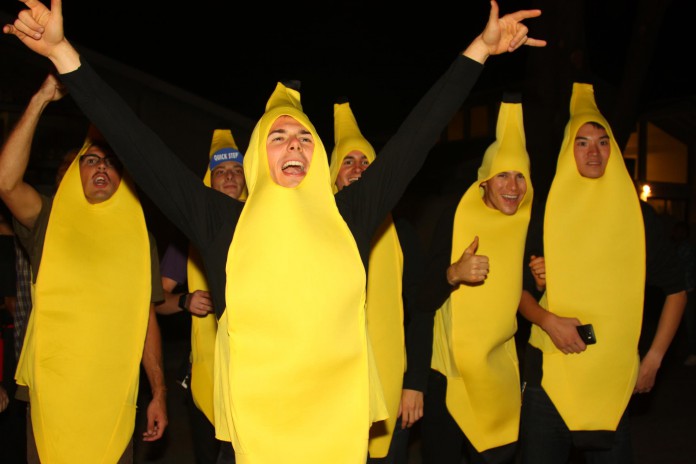 The Office of the External Vice President of Local Affairs held a “Halloween Town Forum” in IV Theater 2 on Tuesday night to prepare Isla Vista residents for the impending onslaught of Halloween weekend.

The first topic of the night was the parking rules in place for the weekend. With as many as 20,000 to 25,000 out-of-town visitors flooding into the small beachside community for the weekend’s festivities, parking is notoriously scarce.

From noon on Friday, Oct. 26, until 6:00 a.m. on Sunday, no parking will be allowed on Del Playa Drive. Sergeant Vuillemainroy explained that IV Foot Patrol officers will maintain barricades from approximately 5:00 p.m. on Friday until the wee hours of the morning.

“We’ve found that if we let students park on the streets, a lot of cars get vandalized,” said Vuillemainroy. “So it makes a lot of sense to move the cars.”

Chris Zbingen, a Transportation and Parking Services representative, informed students that the best places to park for the weekend are Structure 22, just past Pardall Tunnel, and the 18 Mesa Lot that lies behind the Humanities and Social Sciences Building (HSSB). Zbingen noted that given UCSB’s Friday night home soccer game against Stanford, weekend parkers would do well not to park near Harder Stadium that night.

Some enterprising Isla Vista residents are taking the dire parking situation into their own hands by selling parking spots to those who wish to secure a safe berth for their cars. One Facebook group advertising such a sale with 13 available spots asked $45 for a single day, $75 for Friday through Saturday and $100 for guaranteed parking from Thursday through Saturday.

The panel fielded further questions regarding Isla Vista’s Halloween noise ordinance. Generally, residents may play loud music from their houses until 10:00 p.m. on weeknights and until midnight on Friday and Saturday, but for the duration of Halloween weekend the Isla Vista Foot Patrol is enforcing a 6:00 p.m. no-loud-music policy. A violation of the noise ordinance can result in fines of as much as $500.

“Basically, you can’t have the stereo on so loud that we can hear it from outside,” said Vuillemainroy.

Isla Vista Recreation and Parks District Chairman Leif Dreizler advised residents and visitors alike to forego house parties and the inherent risk of police involvement, and instead to take the party elsewhere.

“It might sound fun to have a bunch of friends over,” commented Dreizler, “But I would definitely recommend not having parties and loud music playing, and just going out and coming back.”

Halloween weekend will feature 150 officers patrolling the streets, most of them on foot on Del Playa Drive, Sabado Tarde Road and Trigo Road. Many of these police officers have arrived from across the state of California to assist in the weekend’s enforcement, although Vuillemainroy assured residents that all officers present have worked in college towns and similar environments. The foot patrol will be joined by 10 squad cars, a SWAT team, bicycle officers and Isla Vista’s famous horse-mounted policemen.

“Please use the port-a-potties rather than somebody’s front yard,” entreated Vuillemainroy. “We give so many tickets for that and it’s kinda gross.”

Vuillemainroy and the other law enforcement officials present were, however, quick to assert that their goal for this weekend does not hinge around arrests or citations.

“It’s not about how many tickets we give or arrests we make,” said Vuillemainroy. “We just want to make sure students are safe and have a good time.”

The Halloween restrictions are not limited to Isla Vista—no guests are allowed in the UCSB’s residence halls from Thursday, Oct. 25, until Thursday, Nov. 1. Danny Mann, a representative of UCSB’s Housing and Residential Services, explained that fencing has been placed between Manzanita Village and Isla Vista, forming a “force field” which is designed to prevent IV’s festivities from spilling over onto campus.

The panelists imparted several further weekend safety tips: Jackie Kurtz, of UCSB’s Alcohol and Drug Program, encouraged party-goers to eat throughout the evening and to visit the water stations placed strategically throughout Isla Vista. The medical team treated 60 people for alcohol overdose last Halloween, and the safety team would like to avoid such statistics this year. Dreizler advised of-age partiers and minors alike to avoid bringing alcohol with them to parties.

“If you have somebody visiting, take their arm, write your address [on it], cause they’re not gonna lose their arm hopefully,” deadpanned Dreizler.

Law enforcement authorities and UCSB officials alike drove home the message that they would like to make this Halloween weekend a fun, safe experience for everyone involved—and that following the rules is the best way to make that happen.