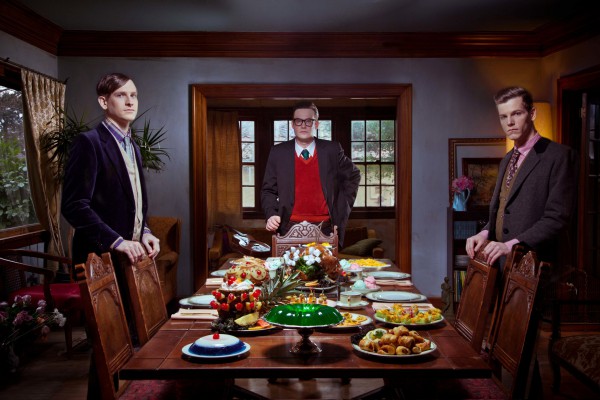 How do you turn the hipster-heavy SoHo Restaurant and Lounge into a crowd-swaying sauna? The answer is written in the stars—spelled STRFKR, to be exact.

You’ve got to get past the name. “It’s improper,” you may say. Understood. But as soon as see how incredibly talented Starfucker (often abbreviated STRFKR) is, you will see past it. Your love will only increase after seeing them live, and will increase ten-fold if you (like me) see them twice, the second time on Oct. 15.

I was fortunate enough to see their sold-out show last year at the University of California Santa Barbara’s Hub, and was immediately awestruck. Regardless of the Hub’s much more uncomfortable and crowded setting, they put on an enjoyable set. But luckily, SoHo was a significantly more plush venue, giving me the opportunity to pay attention solely to the band. To say the least, the Portland band, which consists of members Joshua Hodges, Shawn Glassford and Keil Corcoran, is aesthetically delightful.

The great thing about STRFKR is that their first impressions are pleasantly deceiving. They’re innocent skinny white boys, dressed with button up flannels and oversized sweaters with floppy hair; they seem completely harmless and mild-mannered. They’re boys who you would take home to Mom, until the moment they turn on their instruments.

They put on one hell of a show. Their set was strikingly danceable, both musically and visually—with visuals were both blinding and captivating. The tracks forced what seemed like the entire room—including the band—into never-ending movement that accompanied the transforming art in the background.

Visuals aside, the flow of the show was well-coordinated. The band played with a great swiftness and a superbly formatted set list, leaving little time between songs, so as to ensure that our hips kept rocking and our knees kept bopping. I suspected it would turn from a concert into a dance party; that is what happens whenever I listen to STRFKR.

The boys overwhelmed the venue. At any given moment, you could find yourself lost in a bass triumph, a driving symphony line, some complex beats or obscure vocals.

“No matter how many times I see them, STRFKR never fails to make their shows so amazingly fun and fresh,” said Steven Bautista, a second-year political science major.

Temperatures rose and clothes dampened as the night went on, the crowd growing only rowdier and more ecstatic as the band, along with the crowd, roared through the songs “Bury Us Alive” and “Millions” before indulging in fan favorites “Boy Toy,” “Rawnald Gregory Erickson the Second and German Love.” They also introduced the fans to many of their newer tracks. The feel-good songs worked themselves into me and gave me even more of an urge to yell along with the band.

There was no chatting, no break between songs, only a brief but cherished acknowledgement to the crowd: “Thanks for coming out on a Monday night!” No, thank you, STRFKR.

“STFKR never disappoints. After this performance, I’m stoked for their new album,” said Cory Wellington, a Goleta resident who attended the show.

Walking out of the dim venue, one of the attendees claimed that the show at marked his sixth time seeing STRFKR. After their performance, I can’t say that I was too surprised.

Photo Courtesy of AS Program Boards