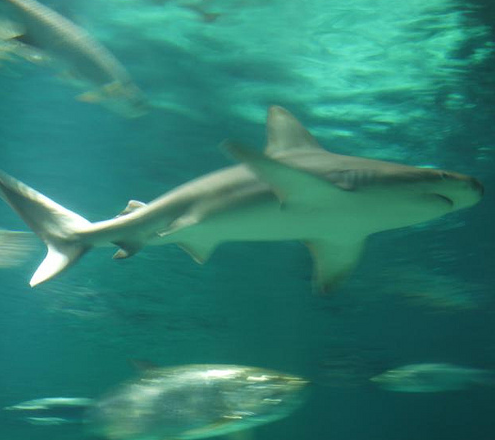 Are the waters of Santa Barbara County safe? It’s a question worth sinking one’s teeth into.

In the calm waters off the coast of Santa Barbara County, it is easy to forget that great white sharks look for sea lions as a mid-morning snack.

On Tuesday, Oct. 24, around 11 a.m., Francisco Javier Solorio Jr., 39, was declared dead at Surf Beach near the Vandenburg Air Force Base after suffering from a shark bite to the torso. Later, it was confirmed that a 15- to 16-foot great white shark had bitten the avid surfer.

At the same beach on Oct. 22, 2010, Lucas Ranson, 19, died after a 14- to 16-foot great white shark bit his left leg. A memorial service for the University of California Santa Barbara chemical engineering student was held the day before Solorio’s death.

Since April 2012, there have been 10 shark sightings in Santa Barbara. In light of the sudden increase in sightings and the recent attack, residents have begun to wonder: is it safe to swim in Santa Barbara waters?

“There’s no reason to be alarmed, but there is reason to be informed,” said Mick Kronman, who has been Harbor Operations Manager for the City of Santa Barbara for 12.5 years.

Kronman said that from 1990 to 1999, sharks have attacked 35 people from Avila Beach in San Luis Obispo County to the Mexican border. Since 2000, about 70 people have been attacked by sharks, but only three of the attacks have been fatal. None of these attacks have occurred within the city limits of Santa Barbara.

Despite the low probability of a shark attack, Kronman said that “the creepy factor” of sharks and movies like “Jaws” spook people.

“There’s something mysterious and creepy about sharks and people feel that sort of primordial fear when they consider how terrible it would be to have an encounter with a shark,” said Kronman.

The Santa Barbara Harbor relies on the information of scientists to determine the reasons for the increased number of shark sightings. Kronman explained that scientists believe that the great white shark population is on the rise. The shark population had a steep downfall after juvenile white sharks were caught in gillnets, so it has taken many decades for the legally protected species to recover.

According to the California Department of Fish and Game, great white sharks can grow up to 21 feet long and over 4000 pounds. Great white sharks are long-lived, but not very abundant; scientists estimate that there are fewer than 100 adult sharks along the California coast. A shark’s gestation period is long—12 months—and the high infant shark mortality rate means that shark populations take a long time to recover. Sharks are vital to the marine ecosystem because they keep in check sea lion and seal populations. They use their vision and a special organ that can sense electrical pulses from the heart or muscles to track down their prey. Most shark attacks are caused when a shark confuses a surfboard, a wetsuit or fins with the silhouette of a seal.

To avoid a shark attack, Kronman recommends that people avoid swimming with sea lions, which great white sharks prey upon. According to him, solo activities are more associated with fatal shark attacks, so bring a friend. When in doubt, Kronman suggests you follow your gut instinct.

“If you get a sixth sense that’s telling you something, that’s speaking to you but you don’t know where it’s coming from, listen to it,” said Kronman. “Other than that, you still have a greater chance of dying on the highway than you do being in the ocean.”

Tyler DeShon, a fourth-year zoology major at UCSB, said that the recent attack was very tragic, but that he was aware that Surf Beach houses sea lion populations that sharks feast on.

“There is a risk inherent in surfing, and the best any of us can do is understand the danger of certain beaches and make an informed decision,” DeShon said.