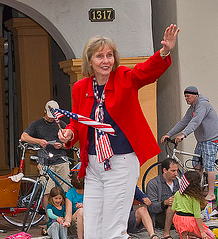 U.S. Congresswoman Lois Capps faced off against challenger Abel Maldonado in a debate on Tuesday night.

The candidates spoke before a sold-out Pollock Theater at University of California Santa Barbara, and still more people watched from home using live streams provided by the Santa Barbara Independent and UCSB’s Carsey-Wolf Center. The debate, moderated by UCSB Political Science Professor John Wooley and Santa Barbara Independent reporter Chris Meagher, was notably attended by a large and vocal contingent of Campus Democrats—Capps supporters filled the courtyard outside the theater and chanted the candidate’s name as she walked onto the stage.

Maldonado spoke out against the current state of affairs in Congress, casting himself as a Washington outsider who will work to establish bipartisanship and to represent the people of District 24.

“I love this area. I’m a local boy. I was raised in this district,” Maldonado explained. “That’s why I’m running for Congress, because I think I can fix Washington.”

Capps, trying to cast doubt upon her opponent’s anti-Washington rhetoric, brought up the fact that Maldonado’s campaign received funding from the unofficial Super PAC of Republican House Speaker John Boehner.

Both candidates spoke extensively about tuition and education funding. Capps discussed her experience as a nurse and education advocate, while Maldonado cited his position as a parent and small-business owner. Maldonado brought up his childhood as the son of an immigrant and claimed that education got him to where he is today.

“Education was my way up and my way out,” explained Maldonado. “I won’t bail out banks, I will help out schools.”

Capps made the point that UC tuition nearly tripled during her opponent’s stint as Lieutenant Governor under Arnold Schwarzenegger, and Maldonado lambasted Capps’ poor record with small business owners. Both candidates stressed the importance of creating jobs to support students who are graduating.

“Education is so clearly tied to jobs,” said Capps, “and we want to make sure that these students here, when they graduate, we’ll have a job for them.”

Maldonado’s past experience includes work as a small business owner and a stint as the mayor of Santa Maria, and he most recently served as California’s Lieutenant Governor under Schwarzenegger. Capps worked as a school nurse and education advocate for more than twenty years, and has represented Santa Barbara in the U.S. Congress since 1998.

The candidates will face off in the election on Nov. 6.