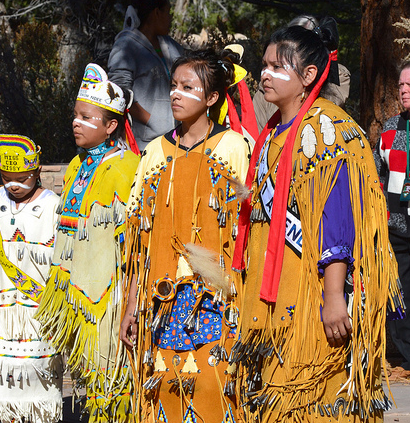 For members of El Congreso, Indigenous Resistance Week (Oct. 8 through Oct. 13) is more than an attempt to celebrate and embrace “la raza,” an individual’s roots and ethnicity; they see it as an opportunity to help others reflect on the social and political implications of Columbus Day.

“His landing marked the beginning of the pillage, theft and plunder of a continent and its people…all in the pursuit of wealth and power,” said Miguel Albarran, a fifth-year sociology major, Latin American and Iberian Studies minor who is participating for the second time in the movement. “Sadly, many indigenous and working class communities are still being pushed aside today to maintain structures that only benefit a few and push forth a neoliberal agenda, aspects inherited from colonialism.”

The events planned throughout this week of awareness are not only meant to bring consciousness, but to provide context for an issue that continues to affect peasant communities.

“It’s unfortunate that we are still being fed this lie about Columbus ‘discovering’ the Americas,” said a film and media studies fourth-year student who asked to remain anonymous. “We’re trying to dismantle those inaccuracies to tell the truth about what he really did.”

The week of events kicked off on Monday, Oct. 8,  and ends on Sunday, Oct. 13. These events range from a tent display to screenings, art, music, dance and workshops, “where [we’ll] unveil the myths behind Columbus and connect it to the state of the world today,” as described on the event page.

“One essential aspect of these workshops is to give voice to the voiceless,” said Ismael Illescas, a fourth-year sociology major. “To bring to light the injustices indigenous communities all around the globe have dealt with for hundreds of years.”

As an activist Chicano/Latino student organization, El Congreso annually organizes this program in an effort to maintain the legacy of the Chicano/Latino movement. While this group is composed of sub-committees that focus on similar areas of interest, the collective organization’s goal is to provide a platform in which gender, racial, economical status and other superficial boundaries are eliminated in an effort to unite its members and the larger community.

“To ignore how the past has shaped our present will only perpetuate the evils of the past without providing a chance to challenge and really create ‘Un Mundo Donde Quepan Muchos Mundos’—a world where many worlds fit,” said Albarran in closing.

Indigenous Resistance Week strives to establish just that—the notion that another world within a larger unconcerned society is possible; an alternate dimension thar, like the smaller groups housed under El Congreso’s roof, facilitates a space in which people of different backgrounds and ideals can peacefully co-exist.