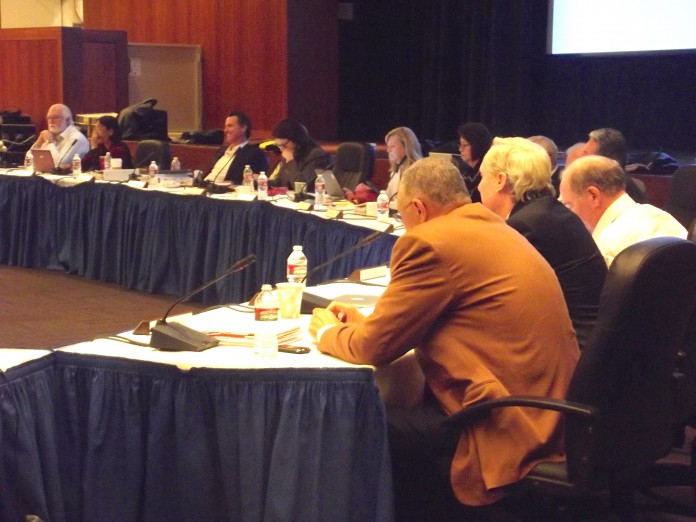 The University of California Regents met today to discuss their options in the event that California Governor Jerry Brown’s Proposition 30 fails to pass on the November ballot. If Prop. 30 fails to pass, a $6 billion cut will affect California students, putting the already-strained education system into a budget crisis.

In the event the Proposition fails, the Regents are faced with deciding how to address a budget gap of $675 million, according to UC President Mark Yudof.

“There is simply no way to avoid the tough decisions we need to make,” said Yudof. “You may think you can elude them. But the truth is that by avoiding them, you will have in fact made a decision—a passive one, but a decision nonetheless.”

There are several options open to the Regents in regards to addressing the budget shortfall. Some of the strategies include debt restructuring, differential tuition, reevaluating health and welfare benefits, and changing UC admission and tuition policies. These strategies were critiqued depending on their potential financial value, difficulty of implementation, and the length of time it would take to successfully implement the option.

Consolidating the medical infrastructures and clinical services provided by the UC system was suggested and would save an estimated $50 million. This option would include rationalizing the delivery of clinical services like transplants and complex neurosurgery to help reduce costs. This strategy received mostly positive reviews from the Regents, including Regent Sherry Lansing.

“I cannot tell you how much I endorse this,” said Lansing. “There is so much we can do that does not hurt quality or in-patient assets.”

Another option would involve the cooperation of the UC campuses in the purchase and negotiation of equipment and supplies. Currently, campuses have the option to negotiate these deals themselves with brokers and Regents discussed changing this model to encourage inter-university negotiation.

“I respect the individuality of each individual campus, but it does not make fiscal sense,” said Lansing. “This is just good efficient business.”

Regent Eddie Island said that while he’s sympathetic to a strategy that makes fiscal sense, he understands why the UC system hasn’t often chosen this option.

“I focus on why it hasn’t happened,” said Island. “We have a strong sense of autonomy at  the local level…So long as the local campuses have the option either to use [this] model or their own, they’ll use their own.”

“This problem is a really big deal. Solve it and it will solve a lot of other problems.” said Regent Norman Pattiz. “What do you do about something like this? This needs as close a look and as many suggestions as many things we talk about today. When we get the money to start something but we don’t get enough to complete it, how do we walk away from it? Find a way to solve this problem and a lot of the rest will solve themselves.”

“We’re looking at where we stand in our health benefits relative to our competitor counterparts,” said Brostrom. “Health benefits has been one of the great strengths, one of the great benefits that the UC system has had in terms of our ability to both attract and maintain faculty and staff. But it is one where frankly, we are above market. If we were able to reduce this and lower our costs, we could put more money into faculty salaries and staff salaries where we are significantly below our market.”

The Regents refrained from taking action regarding any of the proposed measures, reaffirming Regent Lansing’s earlier statement that they were only listening to and evaluating the strategies. Requests for more information were made and potential ways to move forward with strategies were propsed, but no plans were endorsed or promised to be followed through with.