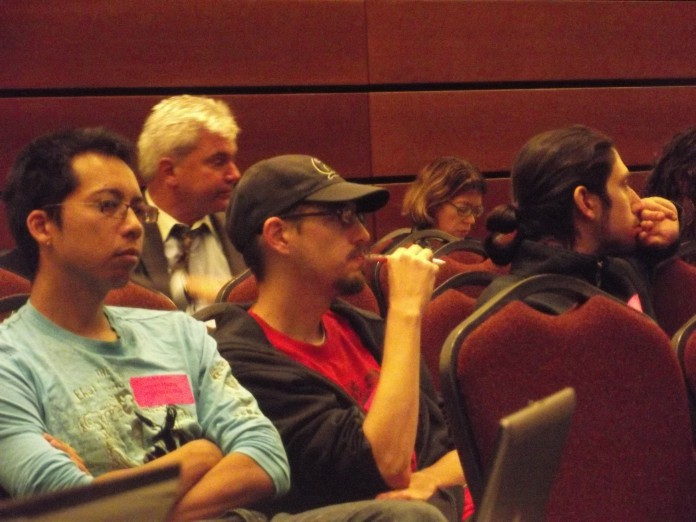 The second day of the University of California Regents September meeting began with public comment, during which students and other members of the community expressed concerns about the budget shortfalls and admission and students from UC Berkeley focused on the selection of the new UCB Chancellor.

“I would strongly urge you to not consider differential tuition, either by campus or by discipline,” said Lee. “It flies in the face of what the UC stands for. It’s a system. It’s 10 campuses strong. It’s a system that’s meant to have each campus be as strong as it possibly can be and to give every student the best education they can get to go out into the world and get a job.”

Lee warned that certain majors would be strongly affected by this decision.

“It discourages students to go into particular areas,” said Lee, “because of the amount they’ll be graduating with.”

UC Santa Cruz Student Body President Nwadiuto Amajoyi continued the theme of what the UC system represents, and urged the Regents to remain calm and level-headed as they proceed through the budget discussions.

“I come to you today as a student that is very frustrated, who has been disheartened, and who, for some reason, one way or another, still has an aura of hope,” said Amajoyi. “We do have to keep in mind the students that we are supposed to be serving, what it is that we stand for as a university. We want to make more money…but keep in mind what this university stands for.”

Representatives from UC Berkeley took the opportunity to express their disagreements with how their university is selecting a new Chancellor to replace the current Chancellor Robert Birgeneau. Ronald Cruz, graduate of UC Berkeley law school and attorney with By Any Means Necessary (BAMN), a coalition which defends affirmative action, spoke to the regents about the lack of public knowledge concerning potential nominees for the position.

“The process is completely closed, confidential, undemocratic and out of line with the tradition of public universities,” said Cruz, “We will not know, according to the current policy, who will be considered for the position of Chancellor, the executive officer of the worlds leading public university until it is a fate of complete. That is not democracy.”

Cruz accused UC Berkeley of behaving in favor of private interests and not addressing the desires of students and faculty.

UC Regent Sherry Lansing spoke after public comment about some of the concerns that were raised and assured the audience that the options being discussed did not necessarily represent the actions that would be taken.

“This will be a brainstorming session. I want to be clear that no ideas are off the table,” said Lansing. “Whether it’s long term or short term strategies you hear today, I want to make this clear that does not mean that the Regents or President Yudof are endorsing or implementing any of these strategies…We are simply examining every possibility.”

Public comment sessions allot three minutes each to express their concerns and encourage action from the Board. Anyone can participate by signing up on the list outside of the meeting, and participants are instructed to address either topics on the Regents’ agenda or topics that are relevant to the University.