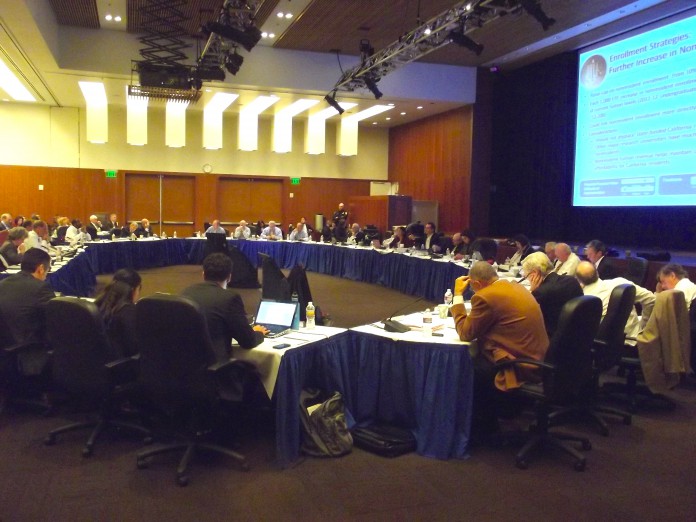 The idea of increasing the percentage of out-of-state students admitted to the University of California, among other proposed options to solve the UC’s potential budget shortfall this November, incurred a heated debate during the second day of the UC Regents meeting.

“I would be more interested in supporting this if we used it as a way to solve our budget gap while we lack state funds,” said student regent Jonathan Stein, who advocated that admitting more out-of-state students should be used as a last resort. Stein also suggested that UC should look into raising the percentage cap of out-of-state students, but also lowering that percentage when financial stability is not so negative.

Increasing out-of-state students as a way to increase tuition revenue was just one of the enrollment, tuition and financial aid strategies proposed to the regents as a way to address the UC’s budget shortfall. Other strategies including changes to the financial aid model, including raising money for middle-class scholarships in the face of the defeat of the middle-class scholarship act.

“I think its important to really emphasize that there has been a concerted effort, a real movement to getting financial aid for middle-class students,” said Chairwoman Sherry Lansing.

“Who does write big checks to the UC system,” asked Lt. Governor Gavin Newsom, “I want to see the business community step up, not just rhetorically.”

Asking corporations and philanthropists to provide funding for scholarships was just one way of garnering revenue that was discussed by the Regents.

“I want us to be incredibly careful if we move to a model that replaces our return to aid funds with private philanthropy, because so many donors want to give to certain campuses,” said Regent Stein, “but most of our students in need are at Riverside or Merced. I want us to be exceptionally careful. ‘”

“Especially by campus, for me, I go to Merced, would be saying ‘Oh you go to Merced, that’s not as good as going to UCLA,’” said Jonathan Lee, University Affairs Committee Chair for the UC Student Association.  “It flies in the face of what the UC stands for.”

“This is one we don’t think is right for UC now or for several years for several reasons,” said Regent Nathan Brostrom. “We feel that most of our campuses have adequate headroom for tuition increases and still have adequate demand.”